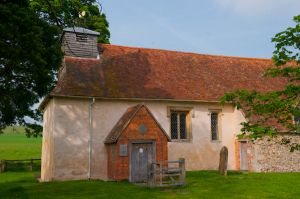 In the absence of the village, St Thomas has served more as the mausoleum for the Fettiplace family of East Shefford manor. The interior is replete with Fettiplace monuments, including a fanciful 15th century memorial to Sir Thomas Fettiplace (d. 1442) and his wife, Beatrice.

There is also a very nice brass to John Fettiplace (d. 1524). There are traces of very early medieval wall paintings above the chancel arch, and later painted Biblical texts around the walls. The font is an early Norman tub design, and there are medieval floor tiles still in place. There is also an early medieval stone coffin lid displayed at the west end of the church.

East Shefford is Fettiplace country. The powerful Fettiplace family enjoyed centuries at the height of power in Oxfordshire and Berkshire. The first known member of the family was Adam, who served 10 times as Lord Mayor of Oxford from 1223. The Fettiplaces came to East Shefford around 1413 when Sir Thomas was named steward of Bampton. 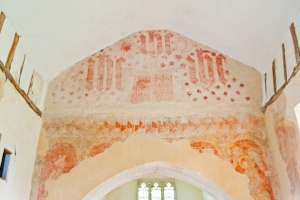 We came to East Shefford on a lovely, warm afternoon in mid May; the sort of afternoon that makes you want to sit in a peaceful countryside spot, far from the busy-ness of life, and watch the clouds go floating by. We found such a spot in East Shefford.

The church is technically signposted, though we almost drove past the small signpost pointing to the wrought-iron gates of the manor. There's room for only one or two cars at the mouth of the manor drive. From there, you walk through a gap beside the gates and down the drive.

Cross over a small bridge across the slow-moving River Lambourne, and take the first drive on your right. This leads past the manor to the churchyard, where St Thomas stands, half-hidden amid trees.

At first, you might mistake the church for a farm-building; 'Is THAT the church?" asked our 11-year old daughter, with an element of disbelief. I think she was thrown off by the fact that there is no tower, just a weather-boarded turret with a weathervane on top.

The church is locked, but the key is in a small box on the kissing-gate leading into the churchyard. There is no sign about the key location on the gate - most people will go to the church door, read the sign, and have to retrace their steps to the gate to fetch the key. You'll avoid that, having read this note, right?

The exterior of St Thomas' is a fascinating mix of materials, with plasterwork, rubble, stone, weatherboarding, and red brick jostling for pride of place. Immediately to the right of the brick porch are a pair of Tudor windows with carved heads on the drip-caps

As you pass through the small porch and into the body of the church the small size of the building strikes you - this is a tiny church (in fact, it is featured in John Kinross's lovely little 2003 book, Discovering England's Smallest Churches (Windrush Press, ISBN 1 84212 728 4).

On your left is the west wall, painted with the Lord's Prayer and Ten Commandments, under which are several painted consecration crosses. Many churches had such crosses, often as many as 12, but most were destroyed during the Reformation.

Below the west wall is the simple early Norman font, in a shape best described as a tub. The font is set on a floor of ubiquitous red tiles, but mixed with these tiles are several original 14th-century encaustic tiles. I was excited by the paltry few medieval examples near the font until I saw what awaited me in the chancel, where practically the whole floor seems made of medieval tiles! 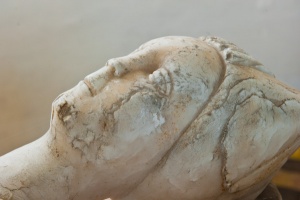 Immediately to the west of the door is a triple-floriated medieval coffin cover, thought to be 13th century. If that is so, it is in remarkably fine condition!

The church notes suggest that it may have covered the tomb of Prior Lawrence, who purchased the advowson of East Shefford in 1223. When the coffin was opened in 1873 it was found to contain the skeleton of a priest with his chalice and paten.

The north wall is filled with faded medieval wall painting, mixed with later texts. And here we have a marvellous bit of British history in a nutshell; medieval pre-Reformation pictorial scenes, once so common in churches across the land, covered at the Reformation and overlayed with more Puritan Biblical texts.

Almost the entire area above the chancel arch is covered in vivid pre-Reformation paintings, though it seems as if the lower sections of these scenes were later whitewashed. The scene over the chancel arch is thought to represent the Nativity, with figures of kings attending the infant Christ still visible.

On the south wall, near the chancel arch, the wall is again covered with Biblical texts through which traces of earlier paintings still show. Above the south door is a small, painted royal coat of arms. By the door is a faded text reminding worshippers to remember the poor - presumably, so they would put a donation in the nearby poor-box!

On the north wall of the chancel is a recessed altar tomb made of Purbeck marble, surmounted by a pedimented canopy. This is to Sir John Fettiplace and Dorothy, his wife. Dorothy was the daughter of Sir John Danvers, and after Sir John died in 1524 she married Sir Anthony Hungerford of Down Ampney. Lady Dorothy had bad luck in husbands, for Sir Anthony also predeceased her.

He was buried on the south side of the chancel, and his brass was apparently there until sometime in the last century when it disappeared. No trace of the Hungerford memorial exists, but reminders of Lady Dorothy and her first husband certainly are - the back of the tomb recess has lovely brasses of the couple kneeling at prayer-desks, facing each other across the tomb wall. Behind Lady Dorothy are figures of their four daughters.

You could be forgiven for almost missing a tomb recess immediately west of the Fettiplace altar tomb; it is set low on the wall, beneath a simple rounded arch. At the base of the recess is a worn stone coffin. 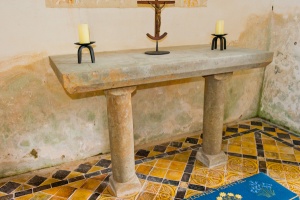 By far the most impressive of the tombs inside St Thomas's is that of Sir Thomas Fettiplace (d. 1442) and Lady Beatrice, his wife, who died on Christmas Day, 1447. The monument stands at the entrance to the side chapel, added by the Fettiplace family in the late 15th century.

Sir Thomas was Sheriff of Berkshire, a position of great importance and a sign of just how powerful the Fettiplace's were in the late medieval period. But if Sir Thomas's pedigree was good, his wife's was even better.

Lady Beatrice was a princess of Portugal, though perhaps illegitimate. Sir Thomas was her second husband; her first was Gilbert, Lord Talbot, the elder brother of Thomas, Duke of Gloucester.

The alabaster effigy of Sir Thomas shows in fine detail the plate armour used in the reign of Henry VI, while Lady Beatrice has her hair bound in a mitre-shaped headdress, and wears a mantle of state tied with a cord and tassels. The base of the tomb is ringed by figures of angels bearing heraldic shields.

Unfortunately, the heraldic designs are no longer visible; presumably, some would have promoted Lady Beatrice's Portuguese royal connections. The detail of the effigies and the tomb, in general, is marvellous. Unlike most memorials of this period we actually know who carved it; the tomb was made by Thomas Prentys and Robert Sutton of Chellaston.

High on the south wall of the chancel is a funerary helm. It is easy to miss; in fact, I was almost ready to leave the church when I spotted it. It is a 15th-century design known as a Salarde, or 'salade' which has been altered to form a 'close-helmet' with a chin piece and an armet. The bits and pieces that make up the helmet suggest a date of 1470-1500. It was originally mounted over one of the Fettiplace tombs to mark the resting place of a man of arms.

Above the simple and rather compelling stone altar table is the east window, inserted in the late 15th century. Incorporated into the window are small sections of stained glass, returned to East Shefford from Holy Innocents church, which is now destroyed. The glass shows a figure of the Annunciation and a mitred bishop, flanking a coat of arms. The same designs are found on the Fettiplace tomb of Sir John and Lady Dorothy, which suggests a date of the early 16th century for the glass.

St Thomas's served the local community here until 1870, after which it fell into dereliction until rescued by the Redundant Churches Fun in 1952. In fact, East Shefford was one of the first churches to be put into the care of the RCF (now the Churches Conservation Trust).

When you visit, you can see why they decided it was worth preserving; it is one of the loveliest settings of any English country church it has been my pleasure to visit - and I've visited a LOT of churches! 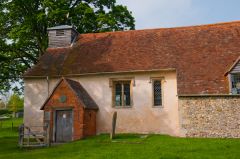 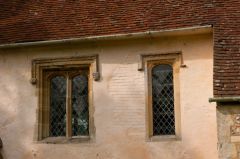 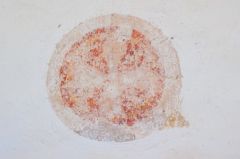 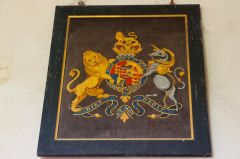 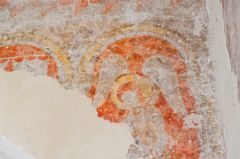 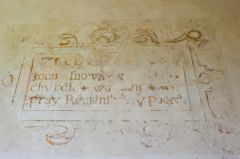 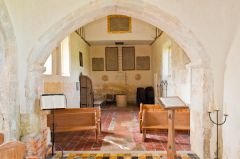 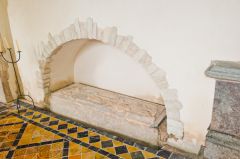