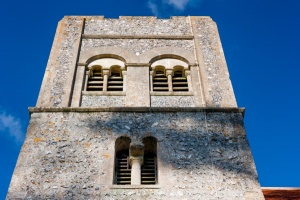 St Swithun's appears to have begun as a chapel of ease for nearby Welford. In 686 AD Ceadwalla, King of Wessex, granted both Welford and Wickham to Abingdon Abbey, and two churches are mentioned in the Domesday Book (though one reference may be to East Shefford church). The monks of Abingdon acted as priests for Wickham until the Abbey was dissolved by Henry VIII.

The location of the church is fascinating; it stands on the site of a Roman camp, near the line of the old Roman road known as Ermin Street, which ran from Cirencester to Silchester. The course of the road ran through the rectory garden, and Roman coins and bits of Belgique pottery have been unearthed there.

Though much of the body of the church was restored by William Nicholson, a Victorian rector who also oversaw the restoration of Welford church, much of the original medieval building remains untouched. 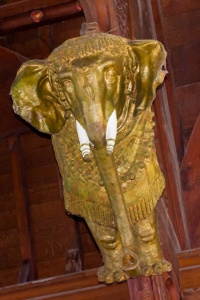 This tower is probably the oldest in Berkshire and is almost completely original. If you look high on the belfry you can see two-light window openings in late Saxon style. The Saxon builders reused Roman ballisters between the window openings, and there are further Roman bricks in the tower walls.

The church guidebook suggests that the tower was used as a watchtower and beacon, a theory that is given weight by a blocked-up doorway partway up the tower wall.

This is thought to be the watchman's entrance, reached by a ladder which could be hauled up inside the tower in times of danger. There are openings in the interior tower walls where beams would have stood to support a beacon fire.

I mentioned Rev. William Nicholson earlier. Nicholson began restoring Wickham chapel in 1845 and arranged for carved figures of angels to decorate the hammer-beam ends in the north aisle. But when he was visiting the Paris Exhibition of 1855 he saw a set of four elephants, made from papier-mache.

Thoughts of angels went out of his head, and he purchased the elephants and commissioned a further four. These remarkable decorative elephants now decorate the eight hammer-beam ends above the north aisle of Wickham church. It is a startling sight, but what's just as startling is what good condition the elephants appear to be in!

The Victorian font is a copy of one in Bradford Abbas in Dorset. The font is topped by a striking, ornate wooden cover, rising like a series of pinnacles to an ornate peak. This was designed in New Zealand for the Crystal Palace Exhibition in 1862 (not to be confused with the earlier Great Exhibition of 1851).

Note the pair of carved pew ends, flanking the central nave aisle. The carvings are thought to have been designed and personally carved by Sir Giles Gilbert Scott. At the west end is a glass case containing a chasuble dating to 1552.

Summing up St Swithun's
A very enjoyable country church in a peaceful location. The ancient tower is fascinating, and the elephant decoration adds a wonderfully Victorian bit of eccentricity to this historic building. 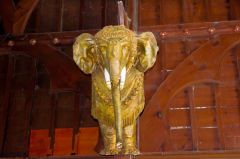 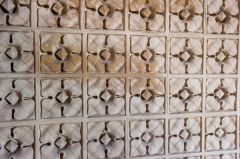 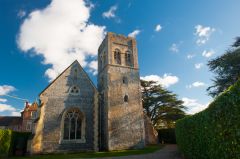 About Wickham, St Swithun's
Address: Church Hill, Wickham, Berkshire, England, RG20 8HA
Attraction Type: Historic Church
Location: On Church Hill, beside the rectory. There is a small parking area outside the church, which is on the left side of the road as you go up the hill.
Location map
OS: SU394716
Photo Credit: David Ross and Britain Express