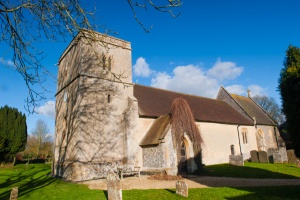 St Andrew's is a largely 12th-century country church with a low nave and simple west tower of two stages, and a large chancel that puts the rest of the building to shame! There was a church here in late Saxon or early Norman times, and bits of that earlier church are incorporated into the present building. There are 13th-century faces carved on the tower banding and a few Norman stones above the west window.

One of the earliest parts of the church is the south doorway, featuring traditional Norman zig-zag carvings in two orders, with an outer moulding with beautiful curvilinear decoration that looks for all the world like rolling waves on the ocean.

Above the doorway arch is a small 14th-century niche, now missing its statue, which was probably destroyed in the Reformation. An unsubstantiated story suggests that the doorway was originally at Poughley Priory, which stood where the modern RAF Welford base is today. Look closely at the right door jamb and you will see a mass dial scratched into the surface. 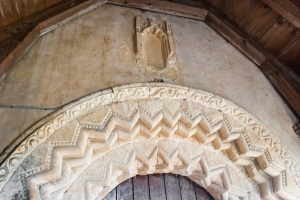 At the time of the Domesday Book in 1086 Chaddleworth was in the See of Salisbury, but in 1160 both church and rectory were granted by Ralph Bassett to Poughley Priory when the priory was founded. The west tower was built in 1237 to replace an earlier one.

In 1524 Poughley Priory and Chaddleworth were both granted to Cardinal Wolsey for the use of his college at Christ Church, Oxford (founded by Wolsey). When Wolsey fell from grace in 1530 both Chaddleworth and Poughley passed to the crown.

In 1532 Henry VIII exchanged Poughley and Chaddleworth for lands in London, including the area that is now St James's Park. At the Dissolution, Chaddleworth passed to the Dean and Chapter of Westminster, who retain the patronage today.

The Dean and Chapter donated the Victorian brass eagle lectern, which was originally made for Westminster Abbey in 1862, possibly designed to drawings by Sir George Gilbert Scott. The lectern stood in the Abbey near the choir screen monument to Sir Christopher Wren and was used for special Sunday services until the 1950s. 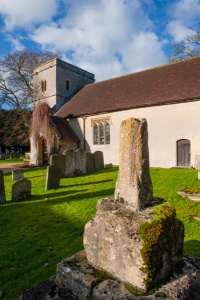 There have been three major additions to the church over the centuries. Two of these involved the construction of family chapels attached to the nave. In 1706 the Blandy Chapel was built on the north side of the nave, and in 1765 the Wroughton Chapel was added just west of the first chapel.

Both of these private, or 'squire's' chapels are raised on stairs to create a semi-private enclave for the patron and their family. I suspect that raising the chapel above the level of the nave also helped emphasise the social status of the chapel owner!

The final major addition to the church took place in 1853 when architect GE Street was called in to create a new chancel, higher and larger than the nave. Street used brick for the addition, rather than making any attempt to integrate the new chancel with the older nave, and as a result, the exterior of the building looks like a bit of a hotch-potch, though to be fair the interior is a much more pleasing whole.

Street's patron was Bartholomew Wroughton of Woolley Park, who probably intended the new chancel to be the first stage of a complete rebuilding of the medieval church.

Unfortunately (or fortunately if you don't like the idea of tearing down medieval buildings) Wroughton died in 1858, and no further work was done on Chaddleworth's church. A few miles away at Fawley, Bartholomew's stepdaughter, Blanche, had the medieval church torn down completely and replaced it with a completely new church in Continental style, so perhaps Chaddleworth had a lucky escape. 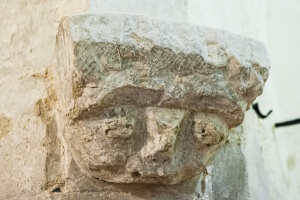 The 12th-century tub font is very plain and stands upon a 19th-century base. The font stands near the tower arch, which is a very unusual ogee shape. This is 14th century, and though not unique, it is not a design you find very often within parish churches; I did a bit of a double-take when I saw it.

On the south side of the arch is a very interesting corbel, carved in the shape of a primitive face. We do not know how old this carving is, but the church guidebook suggests that it may be pre-Christian, and given the style of the carving I find this quite plausible.

Much more ornate than the font is the 18th-century pulpit, which is a cut-down part of an original triple-decker pulpit. There seems to be some doubt if this is original, as the guidebook calls it 'imitation Georgian'.

The main interior feature, however, is the collection of memorials. These are almost all of four local families, the Wroughtons and the Tippings of Woolley Park, the Blandys, and the Nelsons of Chaddleworth House.

To my eye, the most interesting of these memorials appears on the wall above the pulpit, where the figures of Dorothy Nelson (d. 1619) and her sister Mary Nelson (d. 1618) are incised on black marble, above figures of their numerous children.

Above the south door is a royal coat of arms bearing the date 1722 and the monogram GR, though it seems that the date and royal initials were added to an existing coat of arms, probably created during the earlier reign of Queen Anne.

In the churchyard is one final item worth noting; a truncated medieval preaching cross upon a stepped base. This rather stumpy cross is now completely bereft of its head.

A simple country church with a very attractive Norman doorway, not replete with historic interest, but with some very nice furnishings, good family chapels, and a striking collection of Georgian and Victorian memorials to local families. To the best of our knowledge, St Andrews is normally open daylight hours. 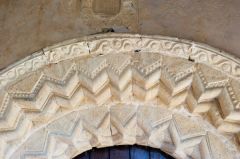 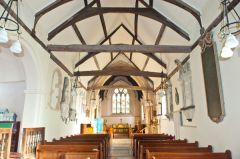 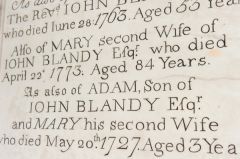 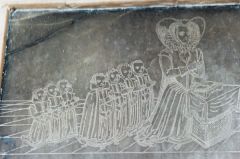 More self catering near Chaddleworth

More bed and breakfasts near Chaddleworth