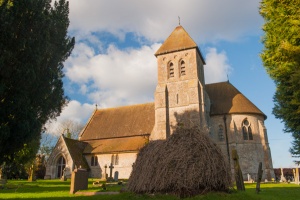 A fascinating Downland church in Early English Geometric style, designed by GE Street in 1866. The patron was Blanche Wroughton of Welford Park, who commissioned Street to tear down the nearby medieval church on this hilltop site, and build an entirely new church.

The centre arch on the south side is thought to be the original chancel arch from the medieval church, and a pair of capitals were salvaged from the old building. There are also a pair of 12th century stoups at the west end of the church.

Also rescued from the medieval church is a brass to Mary Gunter (d. 1658) showing the deceased woman kneeling at prayer.

The result of Street's efforts is a striking building with a rounded apse, reminiscent of churches on the European continent. The tower is oddly placed (for British churches) in the south wall, where the choir and nave join, and it is topped with a pyramidal roof.

There is a small porch in the south-west corner of the church, looking almost like an afterthought. The nave is built on three bays, with both north and south aisles. Street had a hand in almost all elements of the design, down to the wrought-iron candle holders in the choir. The stained glass was provided by the William Morris company. 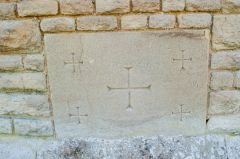 More self catering near Fawley

More bed and breakfasts near Fawley