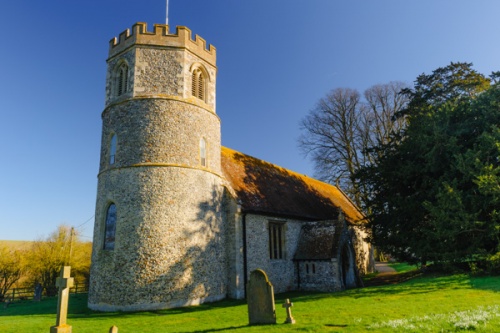 Also known as West Shefford, Great Shefford is a small village in the heart of the Lambourn valley, just north of the Roman Ermin Street road (now the B4000). This is racehorse country, and you are almost as likely to meet ahorse and rider on the road as you are to meet a car.

When we visited in early February the snowdrops were already out in the churchyard, creating a wonderfully scenic picture, with the slow-moving river beyond the sloping churchyard, and the trees, still mostly bare of leaves, looking like slender, gnarled guardians of the approach to the church. 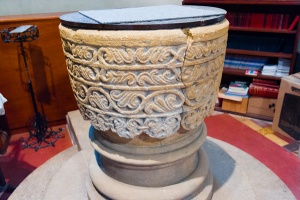 Flights of fancy aside, once you pass through the gateway you are facing the east gable of the church, which is unremarkable at first glance. As you follow the path around to the south doorway, however, the view changes, and you glimpse for the first time the curious round tower, built around 1200 AD.

I say curious, for though the base of the tower is round, the embattled top storey is not; it is octagonal and was added in the 15th century. I have seen many round tower churches, and I must say that on viewing St Mary's in the soft winter sunlight I thought it was one of the most beautiful I have ever visited.

You enter the church through an ancient doorway, also dated to about 1200. This is decorated with common Transitional Gothic motifs, such as zig-zag stonework with grotesque heads, and a slightly pointed arch. The jambs are nicely carved in the same style.

Facing you as you enter the church is a canopied 15th-century niche on the north wall. The state within the niche is modern, however. The north wall itself has several 13th-century lancets.

The most interesting historic feature inside the church is a tub-shaped Norman font, under the tower. This is carved with four bands of foliage decoration and sits on a stepped plinth. The plinth is carved with a curious Greek script which translates roughly as 'Cleanse your sins and not only your face'.

At the east end of the nave, beside a lectern of oak and marble, is an early medieval piscina. Much of the remaining interior decoration is Victorian, though there are several late 17th-century memorial slabs set into the wall of the sanctuary. The other interior feature of note is a series of painted inscriptions which run along the walls at the roofline. These date from 1870.

On the east wall are a pair of marouflages; paintings on canvas, which at first glance look like memorial brasses set high on the wall. These were created by Nathaniel Westlake, who also created the stained glass in the east window. Both glass and marouflages were commissioned by the rector at the time, Frederick Menzies, in honour of his sister.

I loved this delightful country church. It is not spectacular or filled with grand furnishings; it is a simple country church, with an intriguing round tower and a very nicely carved Norman font. These features are augmented by the wonderful location, at the end of the avenue of trees, and overlooking the peaceful Lambourn valley. I would happily recommend a visit. 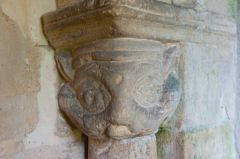 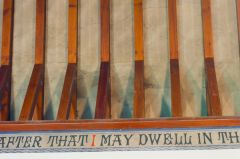 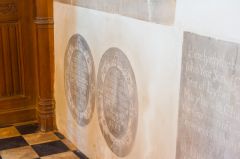 More self catering near Great Shefford