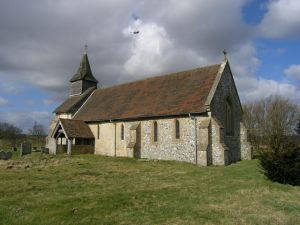 Colemore, St Peter's Church
The redundant church of St Peter ad Vincula in Colemore was built in the 12th century to a cruciform plan. That layout changed in 1670 when the south transept was pulled down.

The interior features a 12th-century font made of Purbeck marble and a 16th-century wooden rood screen. There are two bells, one which may date to 1380 (it has also been dated to 1500).

Much more modern is the colourful Victorian stained glass in the large east window, made by the CE Kempe company in 1876. The manor of Colemore was once owned by Southwick Priory, and later by Henry VIII, who granted it first to Anne of Cleves and then to Catherine Howard.

One former rector was John Greaves, whose son Edward rose to become the royal physician to Charles I.