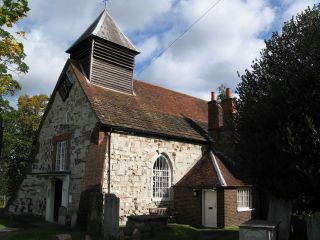 Esher, St George's Church
A rare Tudor church, built at the height of the Reformation in 1540, on the site of an early medieval church. In 1725 the south transept was added to form a family pew for the Duke of Newcastle, then resident at the Claremont estate nearby.

The designer of this addition was John Vanbrugh, the Baroque architect responsible for Castle Howard and Blenheim Palace. The pew is quite extraordinary, with neo-classical Corinthian columns and a finely carved pediment.

The church itself is very simple, composed of a small nave, and an even smaller chancel, with a wooden bell turret at the west end, and the large south chapel. The interior furnishings are primarily Georgian, with an early Victorian west gallery. One of the most obvious internal features is the wooden pulpit, which rises in three tiers.

St George's has connections to several notable people, largely because of its proximity to Claremont House. Among those known to have worshipped at this little church was the future Queen Victoria. Victoria's aunt, Princess Charlotte, also worshipped here, as did her husband Prince Leopold, and other members of their circle. A monument to Princess Charlotte by FJ Williamson stands within the church.

Old St George's church is no longer used for regular worship and is in the care of the Churches Conservation Trust.