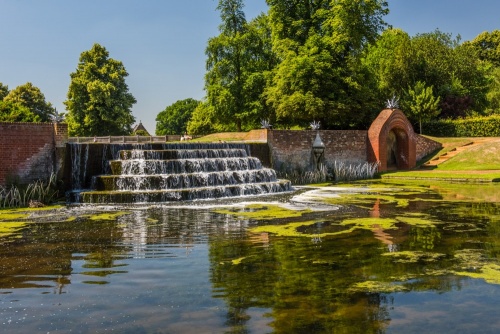 A double-row of enormous 274 chestnut trees planted by Sir Christopher Wren strike the only formal note in the otherwise delightfully informal Bushy Park, located just to the north of Hampton Court Palace.

The site has a long and rich history. It was settled as early as the Bronze Age and includes remnants of medieval field systems, a Tudor deer park, early 18th-century Baroque water gardens, and WWII military camps. 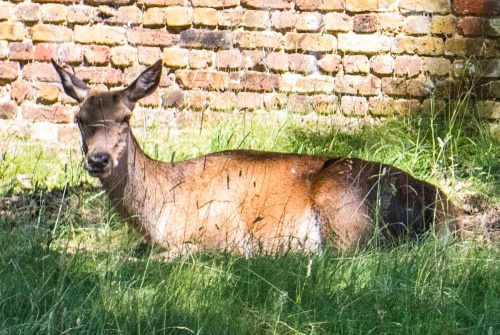 In the late medieval period, rabbits were raised in the park and you can still see traces of artificial rabbit warrens in Warren Plantation north of the Diana Fountain.

Cardinal Wolsey enclosed the medieval fields when he built Hampton Court Palace to the south. In 1529 Wolsey gave the Hampton Court estate to Henry VIII and from that point on Bushy Park has been a royal park. Henry VIII built a high brick wall to enclose the park and create a deer chase for sport.

It was left to Charles I to make the most of the site. Hampton Court Palace suffered from a chronic lack of water, and Charles was inspired to suggest that an artificial river in the park might make a suitable catchment for water to supply the palace.

Nicholas Lane took on the task of creating the artificial river (1633-1639), a canal that stretches for over 19 km from the River Colne in Hertfordshire. Longford River took 9 months to create and was built entirely by hand at a total cost of over 4000 pounds.

We've mentioned Wren's chestnut avenue; this mile-long row of trees provides a formal approach to William and Mary's palace at Hampton Court. The single row of chestnuts is bounded by four rows of lime trees. You can best appreciate the Chestnut Avenue from Teddington Gate to the north, where you can see how the avenue leads to Bushy Park's most famous landmark, the Diana Fountain. 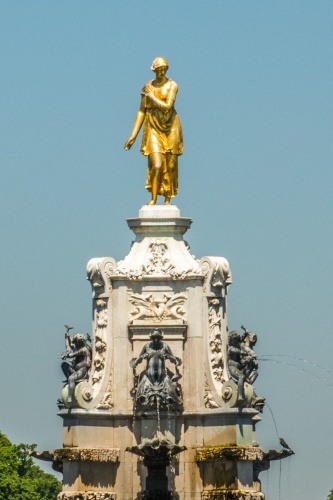 The Diana Fountain is a striking bronze statue of a Greek goddess atop an ornate base of marble and stone. The gleaming golden figure of the goddess is surrounded by four cherubic boys, four shells, and four water nymphs, and rises from the centre of a very large circular pond. The pond is set at the junction of Chestnut Avenue to the north and Lime Avenue to the south.

The Diana Fountain was designed in 1637 by sculptor Hubert le Sueur. Le Sueur was commissioned by King Charles I, who wanted the statue as a gift for his wife Henrietta Maria. He paid the sculptor 200 pounds for the finished work.

The fountain originally stood at Somerset House in London, but in 1656 Oliver Cromwell had it installed in the Privy Garden of Hampton Court Palace. It was moved to its present location in Bushy Park in 1713 to stand in the centre of Sir Christopher Wren's Chestnut Avenue.

The goddess figure stands 2.38m high (approximately 94 inches) and weighs 924kg (2038 pounds). During restoration in 2009, a stone was discovered at the statue's base, inscribed with the initials AR (for Anne Regis) and the date 1712. The stone, also carved with the symbol of a crown, marks the date when the fountain and statue were installed in Bushy Park. 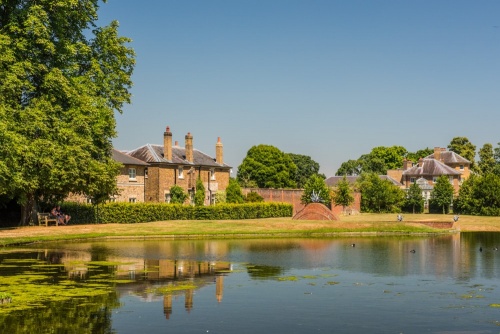 One of the most recent additions to Bushy Park's list of things to do is also one of the oldest. An early 18th-century set of Baroque water gardens in the north-western corner of the park were lost beneath centuries of overgrowth and silt until a recent major restoration programme returned them to their former glory.

The water gardens were created from 1710 by Charles Montagu, 1st Earl of Halifax, as a private recreational garden. They featured a collection of pools, cascades, and basins linked by canals and set in elegantly landscaped lawns and walled gardens.

The water gardens have a fascinating history and are strongly linked with Bushy Park's role in both the First and Second World Wars. In WWI the water gardens were used as a military hospital for Canadian forces (King's Canadian Hospital). After the war, the pools were used as swimming pools for an outdoor school formed to help East London children with respiratory diseases.

In WWII the water gardens were used as barracks by the US military. American General Dwight D Eisenhower stayed at the neighbouring Upper Lodge. It was here that Eisenhower helped plan Operation Overlord, the Allied invasion of Europe that began with the D-Day landings. After the war, the Ministry of Defence took over the site and used it as a base for developing Cold War defence technology.

The ongoing military occupation left the original 18th-century water gardens overgrown and choked with weeds and silt. The gardens might have remained lost to history if not for Sir Roy Strong, who discovered an 18th-century painting of the gardens. The discovery prompted a decades-long restoration that was only completed in 2010. Now visitors can enjoy the gardens as they were in the early 18th-century. 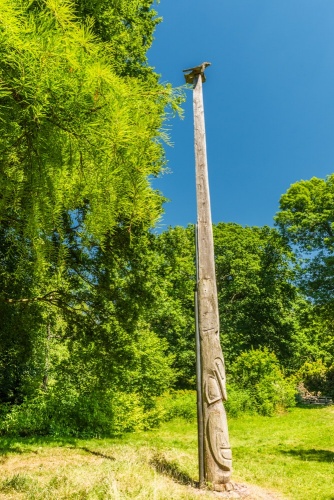 A short walk south from the water gardens leads you to the Waterhouse Woodland Garden, a large enclosed area of tall trees and winding paths beside the River Longstone. The woodland garden was created in 1925 from a pair of early 19th-century plantations. Within the woodland garden is the Pheasantry Welcome Centre, a popular cafe.

The Woodland Garden is divided into distinct areas linked by sinuous trails. Areas include the Silver Birch Glade, King's River Garden, Willow Plantation, and Fisher's Pond. One highlight is a Canadian totem pole erected in 1992 to mark the Park's link to Canadian troops stationed here in WWI.

The war at Bushy Park

During both the First and Second World Wars the park was given over to agriculture in an attempt to provide food for the troops. Part of the park was used as Camp Griffiss, housing the US 8th Army Air Force, the US Strategic Air Forces, and later the Supreme Headquarters Allied Expeditionary Forces (SHAEF).

The camp was named for Lieutenant Colonel Townsend Griffiss, the first US airman to die in the line of duty in Europe after the US entry into WWII. Most of the camp's buildings were pulled down in 1963 but you can still see the occasional drain cover or foundation stones scattered amongst the grass.

The most obvious reminders of the American military presence in Bushy Park are a pair of memorials. A plaque beside Shaef Gate in the north-eastern perimeter wall commemorates the men and women who served at Camp Griffiss and those who cleared the Normandy beaches prior to the D-Day landings. 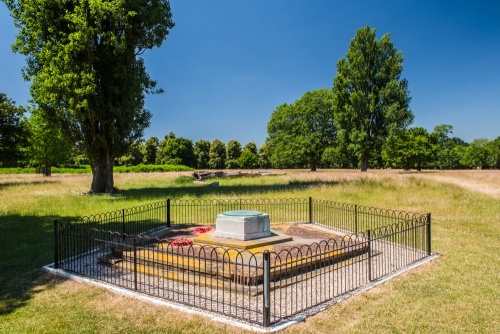 A very short walk into the park from Shaef Gate brings you to the USAAF Memorial, installed by the Royal Air Force in memory of the American 8th Army Air Force who were stationed at Camp Griffiss from 1942. The memorial also commemorates the Berlin Airlift, which was organised and directed from Camp Griffiss. The tablet is carved with the words 'It is through fraternity that liberty is saved'.

Near the Woodland Gardens are extensive traces of medieval field systems, some of the finest remains in this region.

Bushy Park maintains a History Room, staffed by volunteers, where visitors can investigate the long history of the park.

Three rail stations serve Bushy Park; Teddington to the north, Hampton Wick to the east, and Hampton Court to the south. All three stations link to Waterloo Station in London. Hampton Wick is marginally closer to the park, but not by much, while Hampton Court is, as the name suggests, closest to Hampton Court Palace should you wish to visit both the Palace and Bushy Park on the same day. 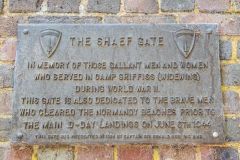 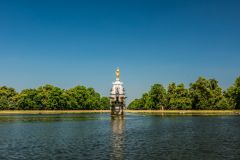 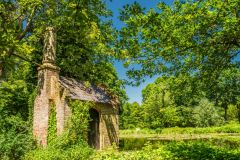 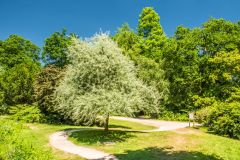 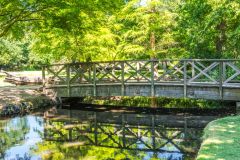 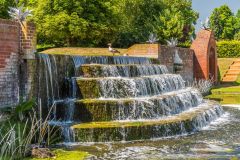 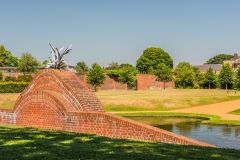 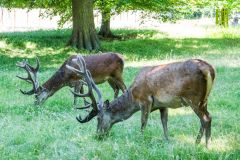 More self catering near Bushy Park