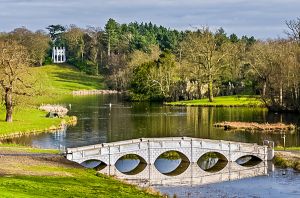 Painshill Park
Painshill Park is one of the last great 18th-century landscape parks in England, designed by the Hon. Charles Hamilton, who was inspired by his 'Grand Tour' of Europe to create a picturesque pleasure park providing visitors with 'living pictures', including a cascade, a waterwheel, a Temple of Bacchus, a Gothic tower, a triumphal Roman arch, and a ruined abbey, among other fanciful follies.
History
Charles Hamilton was born in 1704, the younger son of the 6th Earl of Abercorn. He served as an MP for Strabane in the Irish Parliament from 1727-1760 and represented Truro in the British House of Commons from 1741-1747. Like so many of his contemporaries, Hamilton embarked on an extensive 'Grand Tour' of the European Continent in 1725. In fact, he enjoyed himself so much he went on a second Grand Tour in 1732. He was so struck by the Greek and Roman antiquities he encountered on his travels that he decided to create a picturesque park in Surrey to recreate the classical world.

From 1738 he purchased land at Painshill and gradually bought up adjoining estates until he owned over 200 acres of land. He began to correspond with naturalists, including John Bartram of Philadelphia, who sent him seedlings from America. Hamilton slowly added water features, bridges, and neo-classical buildings like grottoes and temples.

Painshill was one of the earliest and most influential gardens in Britain to abandon the earlier formal layout and create a picturesque landscape full of carefully designed sinuous trails with viewpoints directed towards objects on the horizon. In so doing Hamilton influenced a generation of English landscape gardeners.

Respectable visitors could be shown around the gardens by the head gardener, and so popular did the designs at Painshill become that a special Wedgwood porcelain service was created for Catherine the Great of Russia based on a view of the garden. One of the unusual garden features was a hermitage, complete with a live-in hermit. The hermit was given a 7-year contract to live in splendid isolation, but soon had to be let go for absenteeism!

Hamilton overspent his fortune and was forced to sell Painshill in 1773 to Benjamin Hopkins. Hopkins called in architect Richard Jupp to rebuild Hamilton's country house in a new location within the Park. The house was later enlarged by Decimus Burton. A later owner was Sir William Cooper, who added a suspension bridge and water wheel, and planted an arboretum. Poet Matthew Arnold rented a cottage in the park, where he lived for 15 years until his death.

Elmbridge Borough Council bought the core of Hamilton's parkland in 1980 and restored the gardens.

Among the parkland features is a serpentine lake with islands joined by a series of bridges and causeways. Look for the alpine valley, a water meadow, and an amphitheatre, with carefully arranged follies including a Crystal Grotto, a mock-Gothic Abbey ruin, a Roman mausoleum, and a Gothic tower. One of the most unusual eye-catchers is a Turkish tent.

Aside from the follies, the garden retains some of Hamilton's original 18th-century trees, including 'The Great Cedar', a Cedar of Lebanon thought to be the largest in Europe.

Though the gardens lie beside the busy A3, the road is thankfully only rarely audible.

More self catering near Painshill Park >>