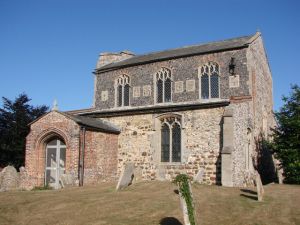 Feltwell, St Nicholas Church
A very oddly proportioned medieval church on the fringes of the Fens, St Nicholas dates to at least the Norman period or possibly even earlier. The chancel arch is Norman, and there is a very nice red-brick Tudor south porch.

The church is as wide as it is long and appears oddly truncated. Your eyes do not deceive you; the chancel was pulled down during restoration in 1862, and the west tower fell down in 1898, leaving the medieval remnants we see today.

There was a church here in the Saxon period, but this was rebuilt around 1072 in the Norman style, and the aisles and clerestory were added in the 15th century. In the late 15th century much of the church destroyed by fire, and the locals successfully petitioned the Bishop of Ely for permission to grant anyone who would contribute to the repairs an indulgence against their sins.

The church is primarily 15th century and is built of flint with freestone dressing. At the east end of the nave is a pillar with very early zigzag carving, possibly dating to the late Saxon period.

In the north aisle is a simple stone bench running the length of the wall. This bench is a relic of the medieval period when there were no pews, and worshippers were expected to stand during services, save only those who were weak or infirm; this latter group were often provided seating along the wall, such as the bench here.

St Nicholas church is only infrequently used for worship and is in the care of the Churches Conservation Trust. 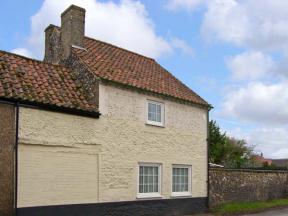 This semi-detached cottage is set in the village of Feltwell in Norfolk and sleeps four people in two bedrooms.
Sleeps 4