Grimes Graves is one of the most fascinating Neolithic sites in Britain. Despite its name, it is not a grave, or burial place, but a flint mine worked between about 2200 and 2500 BC. 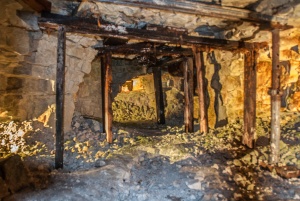 Located in open heath country near Thetford Forest, Grimes Graves consists of over 350 hollows in the ground marking the location of the former mine shafts.

Some of the shafts are sunk as deep as 30 feet below the surface - a remarkable accomplishment when you consider that the Neolithic miners used antlers for picks and animal shoulder-blades for shovels. On one of the antler picks found at Grimes Graves archaeologists found a miner's fingerprint - still intact after 4000 years!

The miners sunk their shafts to find seams of flint for making axes which were highly prized tools and were traded up and down the length of the British Isles. When they had reached the flint seams the miners dug horizontal galleries to follow the flint deposits.

As each shaft was worked out, the rubbish from the next shaft was dumped into it. The miners must have descended the shafts by means of ladders or steps cut into the sides.

Light for the miners was provided by lamps they made by scooping a hollow into a lump of chalk and filling the hollow with animal fat or oil. You can still see soot stains left on the roofs of the galleries by the burning oil from lamps. Strangely, no remains of food or pottery vessels have been found in the mines, leading to the conclusion that the miners must have climbed up out of the mines to take their meal breaks in the fresh air!

The most memorable discovery at Grimes Graves is what appears to be a fertility shrine set up in an abandoned shaft. The shaft is quite short - we can assume that the miners failed to hit the seam of flint they were after and gave up on further digging.

But before they quit the gallery they carved out a ledge, or altar, upon which was found a goddess figurine of chalk, either very obese or pregnant. Beside the female figure was a phallus of chalk. Surrounding both was a pile of antler picks.

The accepted reading of this shrine is that the miners, disappointed at their failure to find the flint they needed, made a religious offering to the goddess to ensure the continued "fertility" of the mine. As is usual in historical investigation, there is a second interpretation which considers the shrine to be a much later addition.

One pit is open to the public, and you can descend a 30ft deep shaft and view 7 radiating galleries. In the summer you can also witness demonstrations of flint knapping (forming tools by carefully chipping away at a piece of flint).

Other Neolithic flint mines can be visited at Cissbury, Blackpatch, and Harrow Hill, all in Sussex, and Great Langdale in Cumbria. 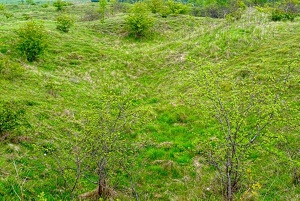 The mines above ground 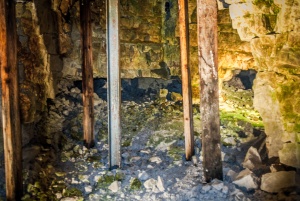 Inside a mine shaft 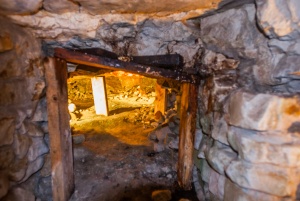 More self catering near Grimes Graves