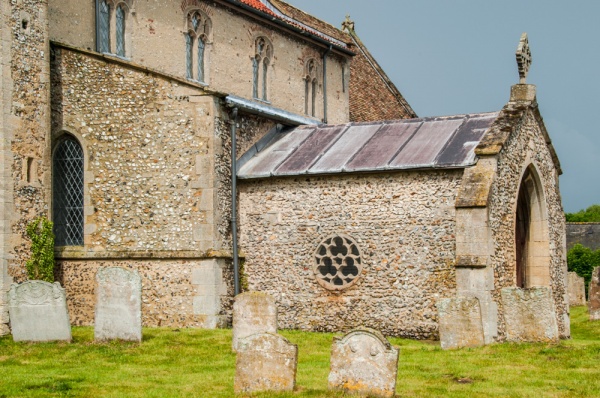 The small Norfolk village of Gooderstone lies a few miles from the National Trust property of Oxburgh Hall. It is worth making the short journey, however, to see this attractive country church.

The sturdy square tower is late Norman, and there is a small Norman window inset on the south face. The south porch and aisle are products of the 14th century. The most interesting feature of the porch is the pair of circular windows, one on either side. These are composed of very attractive trefoil designs.

The most fascinating feature of the church is the wonderful array of carved benches. These date to the 15th century, and feature traceried backs so finely carved as to seem like lace, and wonderful poppyhead ends.

The bench ends originally featured carved figures on the armrests, probably saints, but these were destroyed during the Reformation. The font is mid 15th century and was the gift of the vicar, Peter Floke. He was appointed by the nuns of Denny Abbey in Cambridgeshire, who held the patronage since 1343.

The story of how the nuns came to receive the living of Gooderstone is a tragic one. The parish belonged to Lady Mary de St Paul, who, in 1343 was due to marry Aymer de Valence, Earl of Pembroke and Lord of the manor of Gooderstone.

Aymer was killed in a tournament on the day of his wedding, and Lady Mary gave the rectory and the parish of Gooderstone to Denny Abbey in exchange for eternal prayers for her husband's soul. She later paid for the south aisle to be built as well.

Near the south door is an ancient wooden alms box, still in use after 500 years. There is also a quite lovely 15th-century rood screen, standing to a height of 16 feet. Some of the original painting and gilding can still be seen in the upper sections.

The screen base is wonderfully painted with panels depicting the 12 apostles with a small angel holding a backcloth for each. Behind the screen in the chancel are three wonderfully carved returned stalls decorated with foliage designs.

The chancel dates to around 1200 and boasts simple Early English lancet windows. There is a double 13th-century piscina (13th century) and a very strange, unadorned sedilia built on three levels, with a stone armrest at each end. 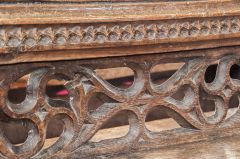 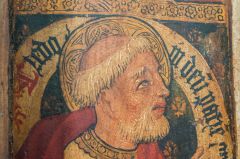 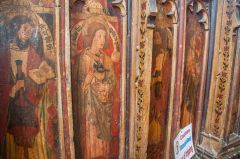 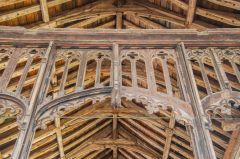 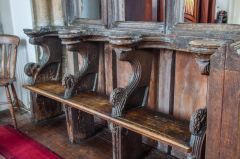 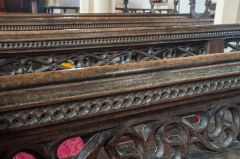