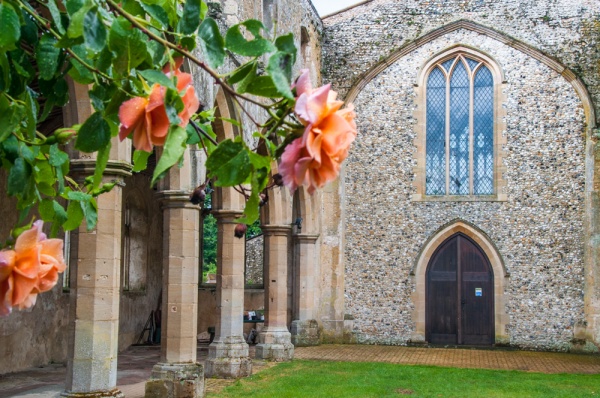 Most people visit the little Norfolk village of Oxborough to see the wonderful moated manor of Oxburgh Hall, the ancestral home of the Bedingfield family (note the difference in spelling between the village and the Hall). Unfortunately, most leave without pausing to peek inside the little parish church of St John the Evangelist, which stands half-forgotten beside the Hall. 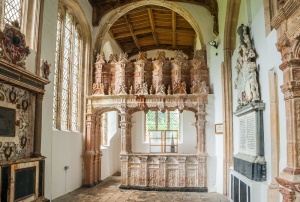 The Bedingfield Chapel
and terracotta tombs

And that's a real shame because the church boasts historic treasures every bit as fascinating as those on display in Oxburgh Hall.

St John's is primarily a Perpendicular Gothic church. The first thing you notice about the building is that there is no tower, only a small bellcote. The original spire was struck by lightning in the 19th century and was rebuilt, only to collapse in 1948, pulling the tower and nave down as it fell.

The nave was never rebuilt, and today it stands roofless, open to the sky. The north aisle is roofed, but the arcading is open to the side. The current church consists of only the original chancel and Bedingfield chapel.

The Bedingfield chapel was built onto the south side of the chancel around the year 1500 to fulfil the wishes of Sir Edmund Bedingfield, who died in 1497. Sir Edmund served as Marshal of Calais, and in a will dated only 4 days before his death, he asked to be buried in a new family chapel. His wife Margaret fulfilled his wish and left money for the chapel in her own will.

The Bedingfield terracotta tombs have been called the finest in Britain, and when you see them it is easy to see why. The craftsmanship is exquisite, the quality of detail is superb. The earliest of the two, and arguably the more impressive, is that of Lady Margaret Bedingfield.

The second terracotta tomb is that of Sir Edmund, which occupies the arch between the chapel and the chancel. Together, the tombs representing the most extensive use of terracotta in an English church. They were built over the years 1525-1550. The terracotta was originally left with its natural colour, but it was later subject to a limewash applied after the Reformation.

On the north wall of the chapel is an ornate tomb to two later members of the Bedingfield family, including Sir Henry Bedingfield (1510-1583). Sir Henry served as Governor of the Tower of London under Queen Mary, and in that role, he acted as the gaoler of Princess Elizabeth, later Queen Elizabeth I.

Sir Henry treated Elizabeth well (a fact which helped keep his head on his shoulders when she later became queen), though Elizabeth was to comment that if she ever needed to make use of a stern and strict gaoler she would call on Sir Henry.

Within the chancel are several interesting historical features, including a glorious Peter's Pence eagle lectern. This brass lectern is six feet high and has a pair of slots to accept the annual 'Peter's Pence' tax. The lectern was built sometime before 1498 under the sponsorship of John Kypping.

Behind the pulpit is a memorial to Charles Perkin (d. 1765), who was responsible for much of the historical research behind Blomfield's History of Norfolk. The Perpendicular sedilia still shows traces of colourful paint. There are also some very attractive fragments of 15th-century stained glass in the east window. 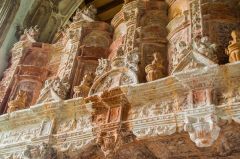 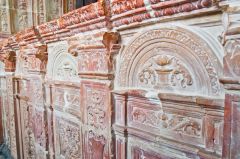 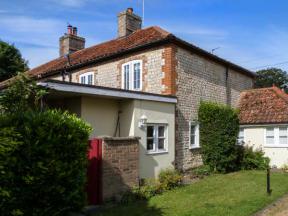