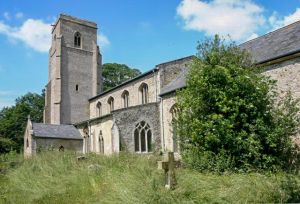 Hockwold, St Peter's Church
St Peter's church at Hockwold (also known as Hockwold-cum-Wilton) is a sizeable country church with a sturdy, square tower rising in four stages to an embattled top. There is a nave with clerestory, south aisle, chancel, and south porch.

The interior is lit with large Decorated and Perpendicular windows. The timber roof of the nave dates to the 15th century and features very finely carved wooden angels, a common theme among Norfolk churches.

There is also a large area of wall painting, probably post-medieval, and a very plain medieval font mounted on a much later base. Perhaps the most interesting feature in the interior is a memorial brass to Amfelicia [sic], wife of Sir John Tindale, and her nine children, dated to 1535.

Among the other memorials is that of Cyril Wyche, a very early member of the Royal Society, and William Lyng (d. 1679) a former rector and fellow of Gonville and Caius College at Cambridge.