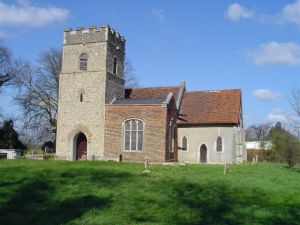 Akenham, St Mary's Church
Only four miles from the centre of Ipswich, yet centuries away in terms of atmosphere, the little church of Akenham seems like the sort of place where nothing has changed for hundreds of years, and nothing ever will. The church is very simple, even plain, with a nave, chancel, south chapel, and tower inserted in the south wall.

The building is a product of the later Middle Ages, and the chapel is late 16th or early 17th-century work. The font is a late medieval survivor, as is a piscina in the chapel.

The most interesting feature of this lonely church is not inside the building, and it isn't even that old. To the north of the churchyard is the poignant gravestone to two-year-old Joseph Ramsey, who died in 1878.

Ramsey's death precipitated a national scandal, when a legal dispute broke out over whether, as an unbaptised child of a non-conformist family, he could be buried with a service in a Church of England graveyard.

The outcome of the case was a change in the Burial Law of England to permit greater latitude in burial practices. For a full account of the astonishing scandal, read this excellent article by Simon Knott on the Suffolk Churches website.

Akenham church is no longer used for regular worship and is cared for by the Churches Conservation Trust.