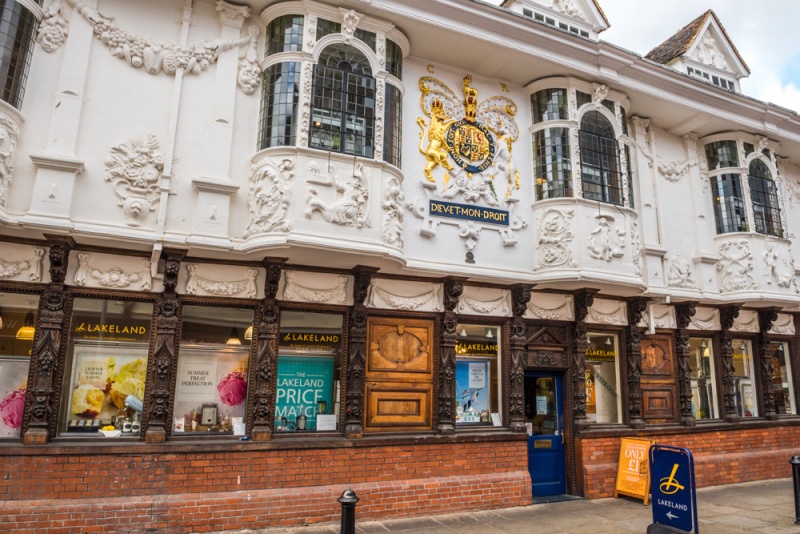 Perhaps the most iconic historic building in Ipswich is Ancient House on Buttermarket, a late medieval building decorated with superb 17th-century pargeting. The pargeting was added between 1660-1670 by Robert Sparrowe, a wealthy grocer. 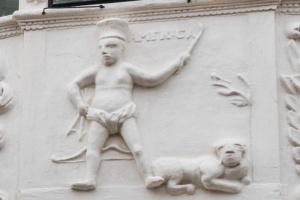 Pargeting is a form of decorative plaster work, common in Suffolk and Essex. The term comes from the Middle English word 'parget', to throw about, or roughcast a wall. It usually refers to relief designs applied to exterior walls of timber-framed buildings, between the timber studs.

A traditional method to form these relief patterns was to stick pins in a board to form a pattern, then press the board into wet plaster. Pargeting was especially common in the 16th and 17th centuries, and common motifs included flowers, birds, and human figures.

The exterior of Ancient House is decorated with extraordinarily richly detailed pargeting on the jettied upper floors, and beautifully carved woodwork on the ground floor. The front facade features four panels of ornate pargeting depicting the four known continents at the time; Asia, America, Africa, and Europe.

It is interesting to see what symbols are used to represent each continent. Europe is a woman holding a cornucopia, with a castle and a horse. Asia is represented by a woman riding a horse, with a domed mosque behind. Africa shows a naked man with a spear, and America a man holding a bow and arrow, with a dog at his feet. Around these main panels are exceptionally detailed designs of flowers and plants.

The design stretches around the corner of the building onto the side facing St Stephen's Lane. Here you see a depiction of Atlas carrying the world on his shoulders, and a rather fanciful depiction of St George dressed as a 17th-century gentleman, slaying a recumbent dragon.

In the centre of the building, framed by a pair of projecting windows, is a gilded coat of arms to Charles II with the motto of the Order of the Garter, 'Honi soi qui mal y Pense'. Beneath, in gold lettering on a blue background, is the royal motto 'Dieu et mon Droit'. 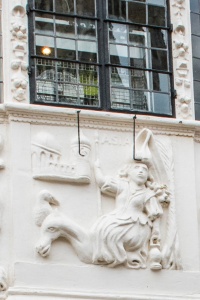 How old is Ancient House? The early history of the building is a subject of debate. Medieval records can be patchy at best and no one is really sure how old the building is. The earliest written record of a house comes from the 14th century, when the site was owned by Sir Richard of Martlesham, but the oldest part of the present building dates to a century later, when Sir Thomas Fastolf built a family home. Again, we do not know exactly when the house was constructed, but it must have been prior to 1483.

The house was owned by a succession of merchants, before a draper named George Copping purchased it in 1567. Copping extended the house, adding panelling to the ground floor and a long gallery on the first floor. In 1603 the Sparrowe family purchased the house, and they owned it for the next 3 centuries.

Ancient House is owned by the Ipswich Borough Council and let out to tenants. The house has been used as a shop for many years, with the current tenants being the Lakeland kitchenware company. An art gallery occupies the upper part of the building, but due to weak floors the gallery has to carefully observe a weight limit for displays.

Off the gallery space a staircase leads to a lower chamber called the Chapel Room, which probably formed part of the original great hall. This room was floored over at some time, and lay hidden for years from view. 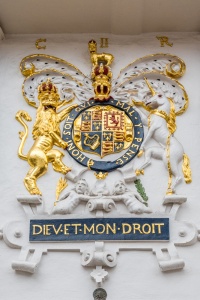 In 1801 a workman discovered the hidden chamber, which was thought to form part of a medieval chapel. The Sparrowe family were Catholics, and probably built the hidden chapel during the Civil War period. An old legend says that the hidden chamber was used to shelter Charles II after his escape from the Battle of Worcester in 1651. The story is unlikely to be true, as Ipswich is over 100 miles from the battlefield and Charles' escape route is generally well known.

Ancient House is rumoured to have a resident ghost, though who haunts the house or why isn't clear. Visitors report feeling uneasy in parts of the building, and shop staff tell of items mysteriously moved from place to place with no one around.

Ancient House stands at the corner of Buttermarket and St Stephen's Lane, with the main frontage on Buttermarket. The building is used as a shop, so the interior will only be open during business hours, but of course, the exterior, with its superb pargeting, can be viewed at any time. 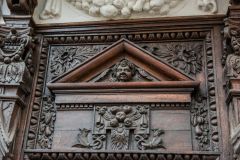 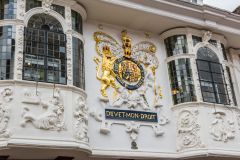