HERITAGE HIGHLIGHTS:   The oldest original set of bells in the world 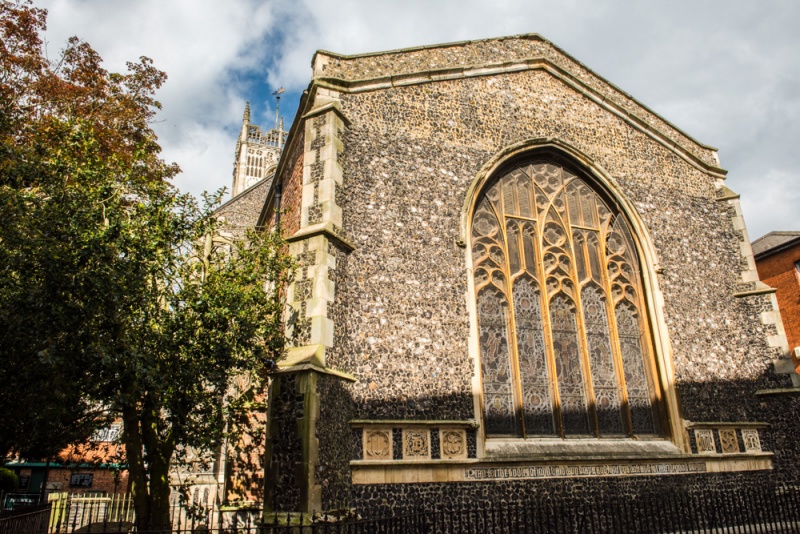 On Dial Lane, in the heart of historic Ipswich, stands the redundant church of St Lawrence. Though the church dates to the 15th century it was comprehensively rebuilt in 1882, when the striking flintwork in geometric designs was added.

The tower is extraordinary, an extravagant chequerboard confection of diamond shapes and figures of angels. The Victorian architects, Barnes and Gaye from London, also removed the centre aisle in an attempt to prevent High Anglican style services. 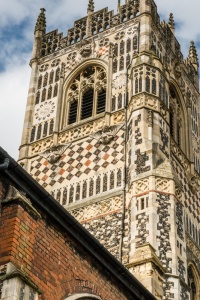 St Lawrence parish was always small; no more than 70 feet wide in places, and by the 1970s there were no more people living in the parish. Not surpringly the church was declared redundant and was passed on to the Ipswich Historic Churches Trust, who look after several old churches in the town centre. After standing empty for many years, and falling into a terrible state of repair, the church was restored at a cost of over £1.2 million to serve as a community centre and cafe.

Highlights include the colourful east window with stained glass by Charles Gibbs of London. Several historic monuments have been gathered together at the west end of the nave, near the tower entrance.

Here, set on the north wall, is a striking memorial to Elizabeth Colman, in the shape of a classical column flanked by scrollwork, with a pair of winged cherubs at the top. Nearby is the wall tablet to Edward Clark Parish, who died in 1764. The epitaph is a fascinating example of Georgian verse:

'Sacred to the memory of
Edward Clark Parish Esq,
late of London Merchant,
who in public life
was esteem'd for his inviolable integrity,
In private an example
of conjugal affection, and parental tenderness,
his religion was free from bigotry,
his charity liberal, without ostentation,
his friendship without disguise,
zealous and hearty
in vindicating the accurs'd & relieving the distress'd,
in his manners gentle,
in his conversations chearfull [sic],
in his dealings sincere,
and
that his virtues might receive their full lustre,
they were put to the test
of a long and severe affliction,
Which he bore wit the sensitivity of a man,
and the fortitude of a
Christian'

Nearby is a beautiful roundel of a wreath, with an inscription to Elizabeth Fisher, who died in 1653. 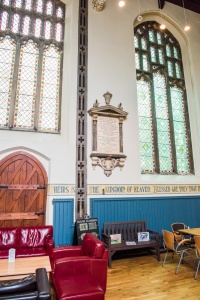 Set against the west wall are several memorial brasses on a plaque. They originally formed parts of a larger memorial to Steven Copping, who died in 1602. One fragment shows Copping dressed in ceremonial armour, his sword by his side, kneeling in prayer before figures of the Virgin Mary and the Christ child, while behind him rises his family coat of arms.

St Lawrence houses the oldest complete ring of bells in the world, a fact acknowledged by the Guinness Book of World Records. The oldest bell dates to around 1440. There are five bells, four cast around 1440-50 and the fifth around 1480.

The latter bell is reputed to have been paid for by Edmund Daundy, Thomas Wolsey's uncle. The young Wolsey, who would rise to fame and power under Henry VIII, would have heard the bells of St Lawrence ring out daily during his youth. The bells are sometime's referred to as Wolsey's Bells.

The bells stopped being used in 1985 when the tower was declared unsafe, but after a fundraising effort a cast iron frame was inserted lower in the tower and the bells were rehung in 2009.

Just to be clear, there are much older bells in English churches, some cast as early as the 13th century, but no other church has a complete ring of bells as old as those in St Lawrence's west tower. One experienced bellringer described the chance to play the bells of St Lawrence as like walking onto the pitch at Lords cricket ground and being invited to hit a few runs with WG Grace's bat.

The church is open during normal business hours. Its a great place to put your feet up and grab a cup of tea of a quick bite, or just to wander about and enjoy the historic architecture. I confess its seems a bit odd to see the church interior filled with cafe tables rather than pews, but at least the wonderful historic building is being used. 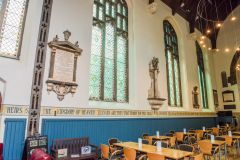 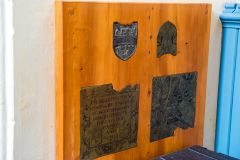