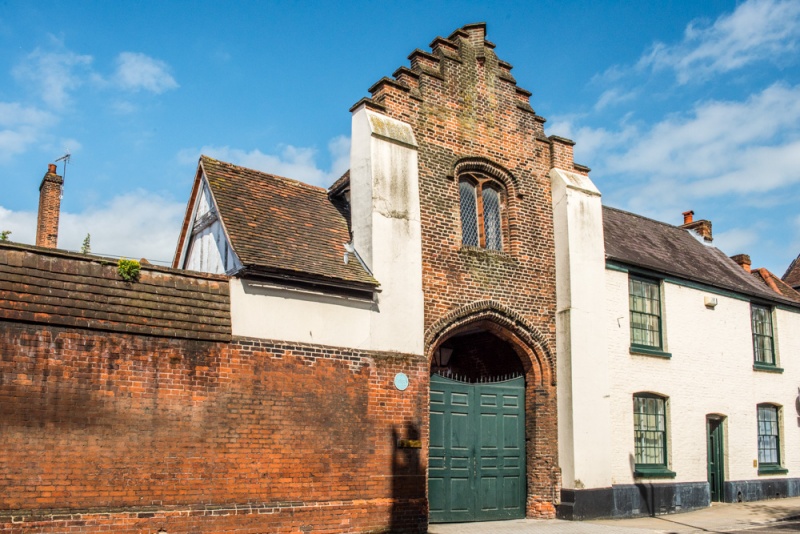 On Northgate Street stands a striking timber and brick gateway that is all that remains of a grand residence built for the Archdeacon of Suffolk in the 1470s. 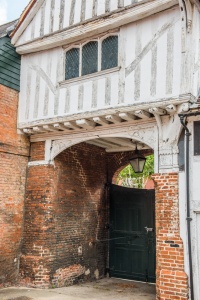 The rear face
of the gateway

William Pykenham was born in Higher Layer, Essex in the mid 15th century. He studied at Oxford and Cambridge and entered into the church, where he quickly gained influential patrons. In 1471 he was named Archdeacon of Suffolk, which means he was the chief representative of the Bishop of Norwich. Pykenham held an ecclesiastical court at the church of St Mary le Tower, just behind his official residence.

Pykenham was a man who knew his own worth. He is said to have had 19 servants at the time of his death. He also required residents of almshouses that he founded to say daily prayers for his soul and those of his parents. Historians believe that had Richard III triumphed at the Battle of Bosworth in 1485 he would have made Pykenham a bishop.

Pykenham found the old building too small for his taste, and quickly set about enlarging it to provide a suitably impressive house for a man of his standing. He built a ceremonial gateway opening into Northgate Street.

The gatehouse and the flanking walls were made of brick, considered a fashionable material and a sign of wealth and refinement at the time. The rest of the gatehouse was timber-framed with a wattle and daub infill. At some point, the gatehouse gained a stepped gable in Dutch style.

In the 18th century the medieval facade was rendered with lime and sand. This served not only to make the gatehouse look more fashionable but it helped seal the walls against draughts. The front wall had large buttresses, but these were just for show, and were removed in the late 18th century. 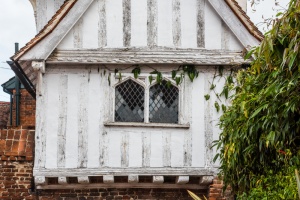 Double windows in the south extension

Over the gateway arch is a single room, best seen from the rear. This is jettied out over the arch and to the south. The fact that there is no jetty to the north suggests that it was once attached to another building that has been pulled down. Access to the room was provided by a brick stair inside the gatehouse.

If you examine the bricks closely you can see that the lower section of the gatehouse uses slightly narrower bricks, and there is discolouration in places. This suggests that the base of the gatehouse formed part of an earlier 14th century gatehouse that was damaged by fire.

On the rear face of the archway you can see carvings of a fish and an odd animal figure on one spandrel, and a star on the other. Historians originally thought the figures were a rebus, or visual pun, on Pykenham's name, with the fish being a pike and the animal being a pig (ham). 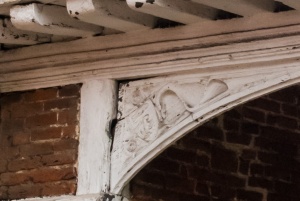 Animal and fish symbols in the spandrel

Why build a chamber over the gate? Could it have been a chamber for Archdeacon Pykenham himself? The fine detail of brickwork suggests that it was a room of some importance. The most likely answer is that it was used to store important documents, especially title deeds.

Within 100 years an extension was added to the south side. You can still see the outline of a blocked doorway at ground level. The doorway gave access to a ladder stair to the first floor, where another ladder stair led up to the main chamber. By 1673 the timber frame had begun to separate from the brick gateway, and a wrought-iron bar was inserted to hold the two parts together.

Though the Gatehouse was restored in 1982 most of the original 15th-century timbers are still in place.

The gatehouse stands at the north end of Northgate Street, directly opposite the library. You can see the exterior of the gatehouse from the street, and you can usually walk into the parking area of the Ipswich and Suffolk Club to see the back of the gatehouse. The gatehouse is normally closed, however, it is generally open to the public for the annual Heritage Open Days event in September under the auspices of the Ipswich Building Preservation Trust. 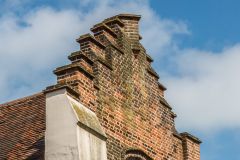 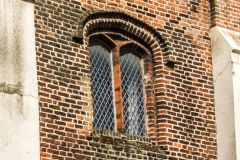