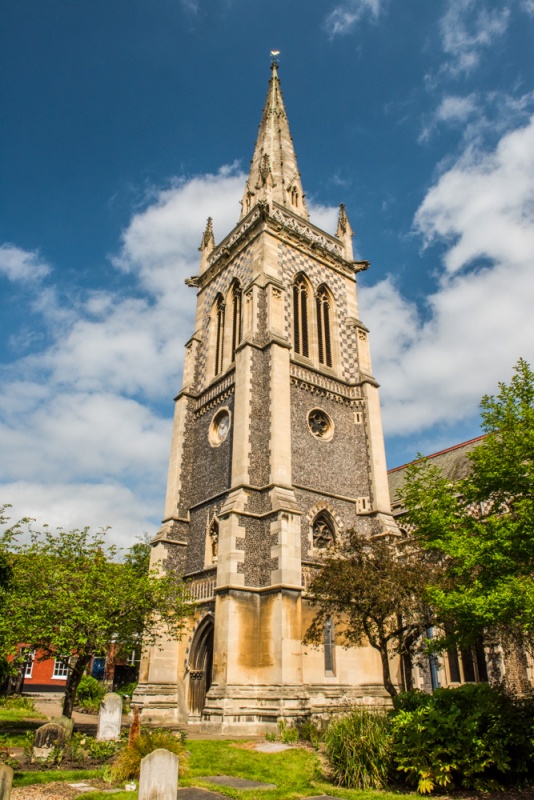 Where Ipswich was proclaimed - the churchyard of St Mary le Tower

The soaring spire of St Mary le Tower Church is an Ipswich landmark, visible throughout the historic town core. There has been a church here since the late Saxon period, but the building we see today is almost entirely a product of the 15th century.

There were six churches dedicated to St Mary in medieval Ipswich, so each was given a unique name to differentiate it from the others. This particular St Mary's became St Mary le Tower. 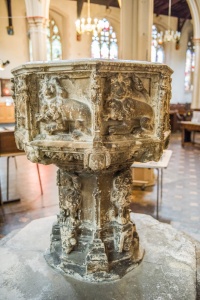 The first recorded church on this site dates to the reign of Edward the Confessor, and was likely built of timber. Then in 1177 Holy Trinity Priory was founded, and for the next 360 years, the canons of Holy Trinity served as parish priests for St Mary.

A second Norman church was built in the late 12th century. One of the most important events in the history of Ipswich took place in the churchyard here in 1200, when King John granted the townsfolk a royal charter, creating the Borough of Ipswich. The charter received its first official public reading in the churchyard. St Mary le Tower then became the civic church, a role it has fulfilled ever since.

In 1448 William Gowty left money to rebuild the earlier church, and it is this Perpendicular Gothic building we see today. In 1570 the civic government built a Corporation Seat at the north end of the nave so that leading councilmen and portmen had a place to sit during sermons that could reach over 3 hours in length.

One of the most unusual episodes in the church's long history came in 1605, when Samuel Ward was appointed Town Preacher. Ward was a Puritan, and soon found himself at odds with Archbishop Laud and Bishop Wren of Norwich. The church authorities had had enough by 1635 when Ward promoted the idea of emigration to a life of religious freedom in New England. 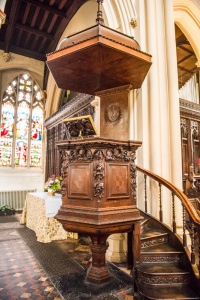 Ward was barred from preaching for life, but the church authorities did not reckon on Ward's popularity in Ipswich. The Corporation flatly refused to find a replacement preacher, granted Ward a pension for life, and supported his widow and son after he died. A grave slab to this controversial preacher, who died in 1640, is set into the floor of the choir vestry.

In 1860 the church rebuilt from the ground up, thanks to a large donation by a wealthy banker named George Bacon. The new church rose on the foundations of the medieval building, to a traditional design by the diocesan architect, RM Phipson. Phipson retained only a doorway and the nave arcades from the old church. He also moved all the old memorials to the west end of the church where they compete for space.

Interior highlights include the 15th-century font, carved with lions intended to scare evil out of children being baptised. On the west wall is a beautifully carved royal coat of arms to Charles II. The pulpit dates to around 1700 and is inset with intricate mosaic panels.

Unusually, we know the name of the craftsman; Edward Hubbard was commissioned to carve the pulpit, which towers over the lecturer and sexton's desks. Look for the Mayor's Pew with its sword rest made to hold the Borough Sword and Maces. 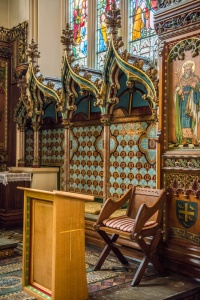 One of the most interesting Victorian contributions is the ornate sedilia, a place for clergy to sit during services. Like the nearby piscina and reredos, it is richly painted and gilded. On the north nave wall is a memorial to William Smart, an MP who died in 1599, painted with a panorama of Ipswich. It is fascinating to compare the townscape of late 16th century Ipswich wit the present day.

There are some beautifully carved medieval bench ends, including figures of a dragon, a roaring lion, and my favourite, a bear holding a ship aloft. There are also some finely carved misericords in the chancel.

There is excellent Victorian stained glass, with the east and west windows both by the Clayton and Bell company of London, and the organ was built by Father Henry Willis, perhaps the most famous organ builder of the Victorian period. There are two beautifully carved screens, at the east end of the north aisle and the other at the entrance to the Lady Chapel.

In the centre of the chancel are four 15th and 16th-century memorial brasses.

St Mary le Tower is usually open daylight hours for visitors. It is easy to find from almost any point in central Ipswich; just head for the tallest steeple! The churchyard has several benches and green spaces for relaxing. The church is unusual in that the parish has extremely few permanent residents, so the congregation is made up of people travelling from across the town and its environs. 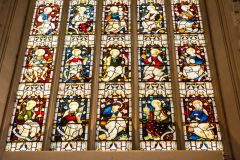 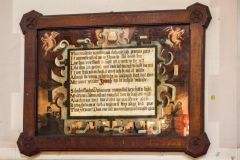