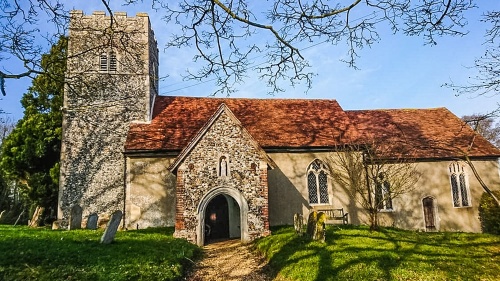 Little Blakenham is a small village five miles northwest of Ipswich. On the western edge of the village stands the 13th-century parish church, dedicated to St Mary.

This small medieval building comprises only a nave, chancel, tower, and south porch. The tower dates to the 14th century, with window tracery of the same period. Look for the finely carved gargoyle in the style of a lion's head, on the western face of the tower. A medieval scratch dial is carved into the chancel wall in the south-east corner.

The porch is a later addition, probably inserted in the 15th century and restored in memory of a former rector, Rev. William French. A plaque in French's honour is set into the porch wall. The porch protects a 14th-century doorway with a statue niche over the arch. 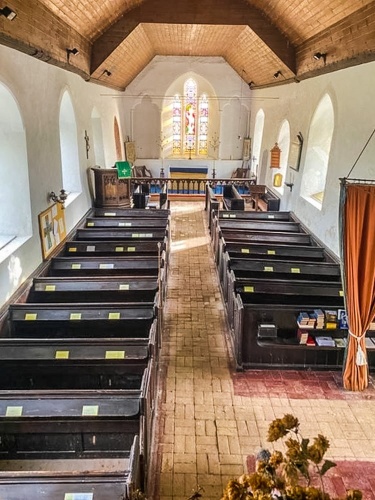 The first thing you notice inside the church is that the whitewashed walls lean outwards, but they are still standing after over 750 years. The nave and chancel are the same width, and there is no chancel arch.

The interior we see today is the result of a thorough restoration in 1868, which cost Â£300, a sizeable amount for the period. Surviving medieval features include moulded cornices along the top of the walls. The oak pulpit, altar table, communion rails, benches, and choir stalls are all from the 1868 restoration.

By contrast, the tower arch is 14th-century work. The octagonal font is of uncertain date, though the official Historic England listing describes it as c. 1400. Opposite the south door hangs a painted royal coat of arms to James II, dated 1685. James ruled for only three years, so royal coats of arms in his honour are rare.

A wall plaque commemorates four local men who died in the two world wars. Only one man, Private Herbert Welham, died in WWI, and his grave can be seen in the churchyard. 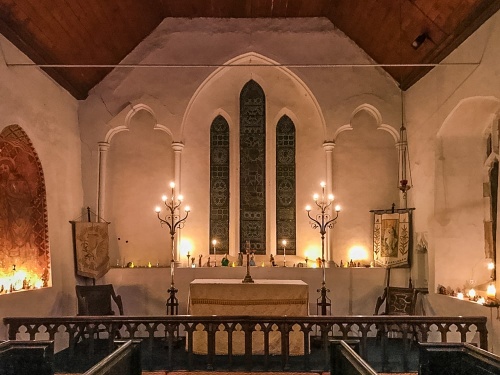 The chancel by candlelight

The windows cover 300 years of medieval style. The large east window dates to the period 1250-1280 and is an excellent example of Early English Gothic style. It holds stained glass inserted in memory of John Ranson Cuthbert (d 1876).

The north wall of the nave has an authentic 14th-century window and three Victorian windows that copy the same design.

There are few memorials inside the church, but one is worth mentioning; it is a wall tablet remembering three 19th-century children of the Cuthbert family who died young, aged three, one, and three weeks respectively. There is a 15th-century piscina set into the south sanctuary wall.

When the east wall of the chancel was restored in the Victorian period, medieval wall paintings were discovered, though these were later painted over. 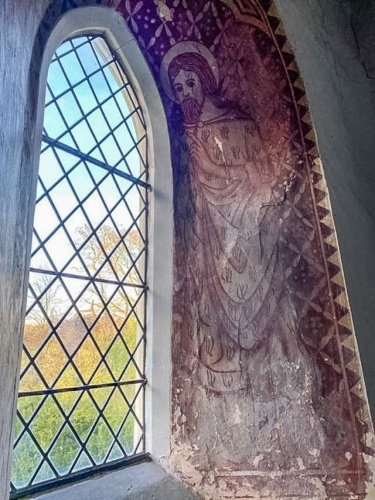 Sometime around 1850 the north sanctuary window was unblocked, revealing original 13th-century wall paintings. Rather than preserve the paintings, as we might do today, the Victorians chose to repaint them.

The eastern splay of the window shows a robed and bearded figure of a man. His identity is uncertain, but the painting may represent Christ.

The western splay of the window is painted with the figure of a woman holding a bird. This may represent the Church in the guise of the Bride of Christ. 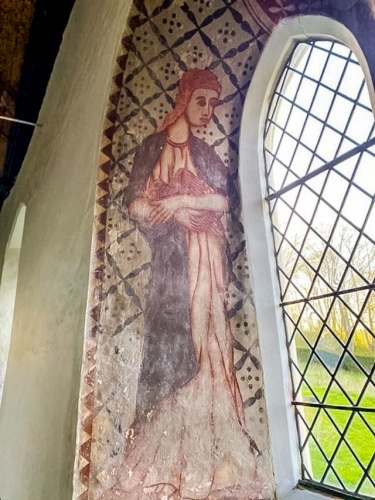 Little Blakenham Church is a delightful rural church of great simplicity and charm, well worth seeking out for its quiet location and the restored 13th-century wall paintings.

Little Blakenham village is just off the B1113 north west of Ipswich. The church is at the western edge of the village on Valley Road (signposted towards Nettlestead). There is just about room for one or two cars to park on the verge by the churchyard gate, or, alternatively, it is a short walk up Valley Road from the village callbox, where there is parking.

More self catering near Little Blakenham