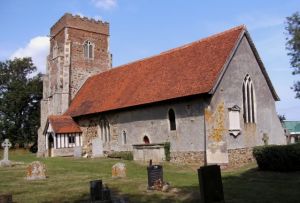 Little Bromley, St Mary's Church
A delicious Norman country church built of puddingstone rubble and limestone, set in a rural landscape. The church was begun in the 11th century, but the nave is 12th century, while the chancel dates to the early 14th century and the timber porch to Elizabethan times.

A tall west tower was added in the 15th century. It has a base of stone but is topped by attractive red brick.

The interior features a nicely carved font, with an octagonal bowl carved with Tudor roses and the figures of saints. The windows are a fascinating mix, with the earliest dating to the 12th century and the newest to the 16th.

There are modern stained glass panels to Archbishop Laud and King Charles I, while in the chancel is a 14th-century piscina. The bells include a pair of late 14th or early 15th-century date, thought to be made by Robert Burford of London.

The church is no longer used for regular worship and is cared for by the Churches Conservation Trust.