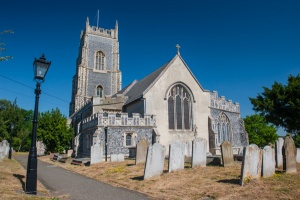 There are two churches serving the coastal town of Brightlingsea. The more modern, situated near the waterfront, is St James. The older and more interesting historically is All Saints, set on a low hill about a mile inland from the sea, far from the core of Brightlingsea itself. In fact, so far from the centre of town is the church that we drove right past it before realising we'd arrived at our destination!

All Saints was begun around 1250, though it incorporates parts of an earlier Norman church. It incorporates even more than that, for Roman bricks can easily be spotted in the walls, particularly in a round headed recess by the south door. Brightlingsea was associated with the Cinque Port town of Sandwich, Kent, and All Saints is still used as a meeting place for electing the Deputy of Brightlingsea, who serves as a link between Sandwich and the town.

The most striking external feature is the embattled tower, built of local flint in the last years of the 15th century. The tower stands 97 feet high, in three stages, with a minstrel gaklllery built into the lowest stage.

The tower really is quite remarkable; with one of the finest examples of diagonal butress bracing in East Anglia. Under the tower is a baptistry, housing a Tudor font, carved with roses within a quatrefoil. Considerable traces of gilding and colourful paint still cling to the stone surface.

In the Lady Chapel, north chapel, and central nave aisles are a series of 16th-century memorial brasses to the Beriffe family, wealthy local merchants and benefactors of the church. William Beriffe and his wife Joan have brasses in the nave aisle.

In the north aisle is a touching brass to Mary Beriffe, showing her 4 sons and single daughter clutching her robe. Also in the north aisle is a 16th century painted (not stained) Flemiish glass panel depicting St Paul. This is part of a larger design, the rest of which is at Ely Cathedral. We do not know how the window came to be separated, and how a panel of a cathedral window came to be here in an Essex parish church! 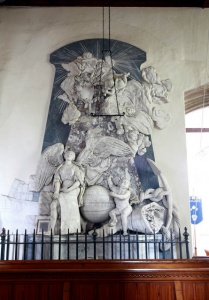 Set into the floor of the Lady Chapel is a 13th-century coffin lid. Also in the Lady Chapel are brasses to generations of the Beriffe family. The oldest is that of John Beriffe (d. 1496), and the youngest that of Alice Beriffe, who died in 1536. Alice's brass is a palimpsest; that is, reused. The reverse side has a much older brass of a medieval clergyman.

In the chancel is a very large marble memorial to Nicholas Magens (d. 1764), a German-born lord of the manor, and one of the founding members of Lloyd's insurance company in London. Magens purchased the Brightlingsea estate only a year before his death, and his impressive monument was designed by Nicolas Read and erected in 1779.

In the south chapel are late 17th-century grave slabs, including those of Francis Wheeler (d. 1692), and his son Francis, who died just 2 years later. There is a 16th-century statue niche in the south wall, with a headless figure who may be a bishop, or perhaps St Nicholas. 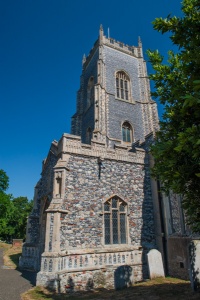 In 1872 severe storms along the North Sea coast caused widespread destruction and terrible loss of life. Thirty-six local seamen were lost from Brightlingsea, and this disaster prompted the then vicar Rev. Arthur Pertwee, to create a frieze of individual tiles, each inscribed with the name of the deceased and the ship on which he served.

William Stammers, church warden, and Albert Blyth, who wrote the inscriptions, helped Pertwee design the original frieze. The idea took hold, and since 1872 a tile has been added every time a Brightlingsea native is lost at sea.

At first the tiles were limited to mariners by occupation, but this was altered to include anyone from Brightlingsea who lost their lives at sea. Hence we see a tile commemorating Sidney Siebert, who was not a fisherman, but was drowned in the wreck of the Titanic in 1912.

There are now over 212 tiles, each unique, each telling a story of tragic loss. Its a reminder of how closely the people of Brightlingsea have historically been tied to the sea. Reverend Pertwee, who servedd as vicar for 50 years, from 1872-1912, was known to climb to the top of the tower and raise a light on the flagstaff to guide the fishing fleet safely home in a storm.

One maritime tragedy that is not commemorated visibly is the loss of sailors from the yacht Lorena in 1903. Nine crewmen were being rowed by a pair of local men to their ship in Brightlingsea harbour when the rowboat sank, drowning 8 crewmen and one local man. The sailors were buried in an unmarked mass grave in the churchyard, but there is a move afoot to create a memorial. 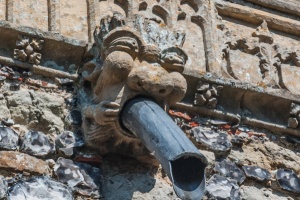 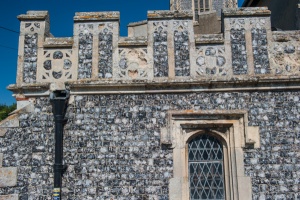 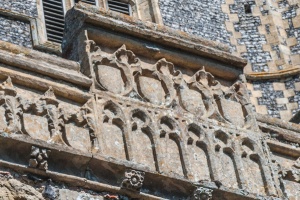 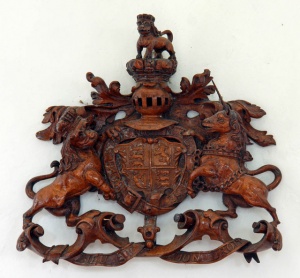 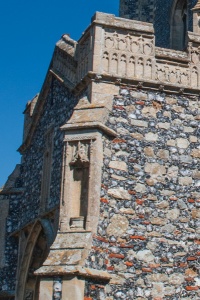 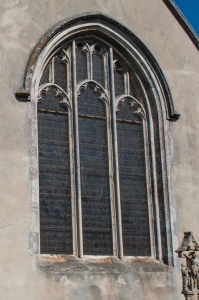 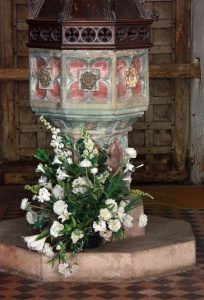 Nearest Accommodation to Brightlingsea, All Saints:

More self catering near Brightlingsea, All Saints

More Hotels near Brightlingsea, All Saints

More bed and breakfasts near Brightlingsea, All Saints