HERITAGE HIGHLIGHTS:   One of only two churches designed by Robert Adam 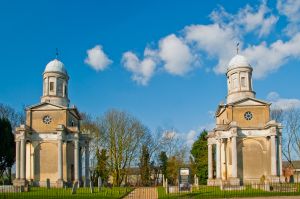 The Mistley Towers are a pair of 18th-century towers designed by Robert Adam to complement the Georgian church of St Mary the Virgin at Mistley. The towers, in typical Adam neoclassical style, stood at each end of the church, which is no longer in existence. The site overlooks the River Stour and stands next to Mistley Quay.

In 1776 local landowner Richard Rigby commissioned Robert Adam to enhance the existing church, and turn it into a truly grand edifice. Rigby's father had made a fortune by shrewd speculation during the furore surrounding South Sea investment in the early 18th century. One of the things he did with that money was to build a new church in 1735, at the north end of Mistley village.

Richard Rigby augmented his father's fortune when George III named him Paymaster General of the Armed Forces. Rigby had grandiose plans for Mistley, including making it into a fashionable spa. His father's plain brick church did not fit in with those plans, so he called in Robert Adam, master of the neoclassical style, to design a new church. 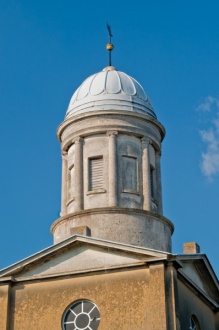 Adam designed a typically splendid building, with a porticoed central block in neoclassical style, flanked by tall towers, each topped with a small dome. The body of the church was symmetrical, with semi-circular porticos on the long sides.

Adam's design called for Ionic columns to supporting a tiered structure augmented by a decorative cornice. This unconventional design drew upon the layout of classical Roman tombs and would have struck an 18th-century viewer as being very unusual, even odd. The material is rendered brick and Portland stone, and each tower is topped by a small lantern dome.

The towers are internally the same, except that the eastern tower (originally the chancel) has a ceiling painted with a representation of the Holy Trinity. The towers are surrounded by the former church graveyard, with several interesting 18th-century tombs including a rather intriguing black granite mausoleum for members of the Norman family.

Unfortunately for Rigby, his grand scheme to turn Mistley into a spa never materialised and the church was the only substantial part of his plan to be carried out. The church that stood between the identical towers was demolished in 1870 when a new parish church in Gothic Revival style was constructed nearby.

The height of the towers made them useful for navigation along the estuary, so they were preserved, and a certain symmetry created by taking the columns that had supported the porticos and placing them on the facing sides of the towers.

The towers were sold to a pair of local families who intended to use them as mausolea, but these plans, too, fell through and the towers were left to decay. They were rescued by the Georgian Group and restored in the 1950s by architect Raymond Erith.

The towers are cared for by the Mistley Thorn Residents Association, even though they are officially under the wing of English Heritage.

The towers are quite striking, but to be fair it doesn't take very long to walk all around them and take in the finer points of Adam's design. You can get a key from the nearby workshops by calling ahead, but you can access the exterior at any time. Robert Adam only designed two churches that we know of, and it is interesting to speculate as what Mistley might have looked like if the rest of his church here had not been pulled down.

There is no on-site parking, but you ought to be able to find parking along one of the nearby roads. Note that the B1352 is quite busy; it took me ages to find a break in traffic and cross the road to the towers. 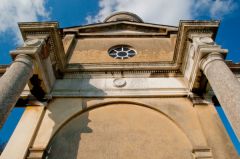 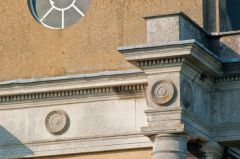 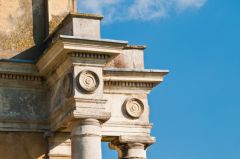 More self catering near Mistley Towers >>