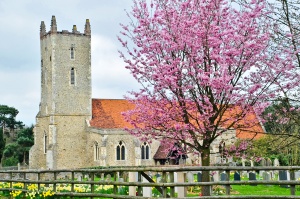 St Mary's is a lovely country church on the edge of Dedham Vale, beside the manor house of Langham Hall. The church featured in several of artist John Constable's best-known works. The oldest part of the building dates to the 12th century with the addition of a 13th-century tower and 14th-century chancel. The material is rubble and flint trimmed with limestone, and Roman brick is used in several places.

In the chancel are a pair of late 17th-century monuments, one to William Umfraville (d. 1679) and other to his son Charles, who died in 1696.

On the wall is a royal coat of arms to Charles II, dated 1660. There are two early medieval chests in the vestry; one 13th century and an earlier 12th-century version created from a single oak log. In the wall of the south aisle are a 14th-century tomb recess and a piscina of a similar age. 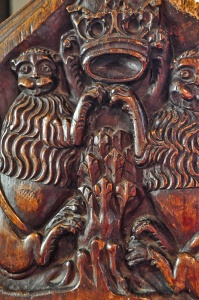 Sometime in the late 19th century, an ancient oak altar figure depicting the Virgin and Child was removed from the church. It was later discovered in storage at Langham Hall. The carving, dated to 1200-1220, was purchased for the Victoria and Albert Museum in London. A small information panel about the carving is on the wall of the tomb recess.

In the churchyard is the Hurlock Schoolroom, a small building founded in 1832 by Dr James Hurlock. During the week it served as a girl's school, and on Sundays it was a place for poor or ill parishioners to rest between services.

I would call St Mary's an attractive church, not blessed with any particularly compelling historical features beyond its association with Constable, but a quiet country church in a very pleasant location overlooking Dedham Vale. 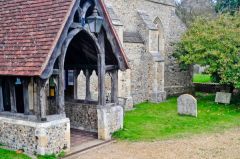 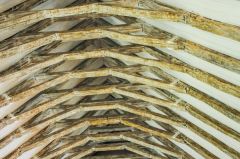 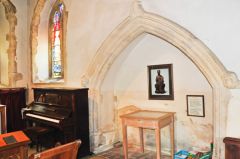 More self catering near Langham

More bed and breakfasts near Langham