Colchester, St Leonard at the Hythe 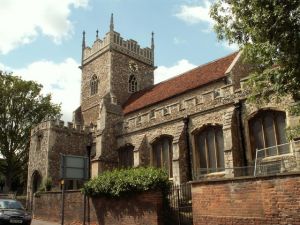 Colchester, St Leonard at the Hythe
A 13th-century church with major 15th-century remodelling, St Leonard's is graced with a striking tower. It stands on a site once occupied by a Saxon church and is entered by way of a two-storey south porch, where the medieval door shows bullet holes from the Civil War.

The bullet holes came during the Siege of Colchester, when Royalist troops took refuge in the church, pursued by Parliamentary soldiers. The nave roof is a lovely 16th-century hammerbeam creation, but the roof in the north aisle is at least a century older.

There are a number of very fine Victorian and 20th century furnishings, including a nicely carved and painted screen and rood, which incorporates bits of the original early 16th-century screen.

There are early 20th-century wall paintings over the chancel arch; a series of medieval paintings were said to have been found in the chancel during rebuilding in the 1860s but these were then painted over. Among the memorials are quite a few ledger slabs and a monument to William Hawkins (d. 1812), carved by George Lufkin.

There are early 16th century piscinas in the chancel and south chapel, and an octagonal 15th-century font brought here from East Donyland church in 1840.

An earthquake in 1888 damaged the upper part of the tower, which was rebuilt, but the church was made redundant in 1983. St Leonard's is no longer used for regular worship and is in the care of the Churches Conservation Trust. There are regular - though limited - opening times (see the CCT website link below), but at other times there is a keyholder nearby.

Nearest Accommodation to Colchester, St Leonard at the Hythe:

More self catering near Colchester, St Leonard at the Hythe >>

More Hotels near Colchester, St Leonard at the Hythe >>

More bed and breakfasts near Colchester, St Leonard at the Hythe >>