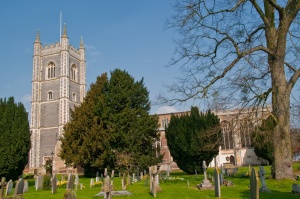 One of the great churches of northern Essex, St Mary's dominates the High Street of Dedham. The church as we see it today is primarily a 15th-century rebuilding of an earlier medieval church which existed at least as early as 1322.

That early church occupied the site of the current south aisle chapel, an indication of just how much smaller it was than the grand 15th-century building we see today! The door to the vestry is thought to have been the main entrance to the 14th-century church.

Work on a new church was begun in 1492 and completed in 1522. The walls are rubble and flint, so common in East Anglia. The tower is knapped flint, dressed with limestone. The striking west tower, finished in 1519, is totally self-supporting and features an unusual vaulted passage.

An unsubstantiated tradition is that Margaret Beaufort, mother of Henry VII, gave money for the tower to be built. Whoever paid for it, the tower is certainly striking; it stands 131 feet high and is visible for miles along the valley. 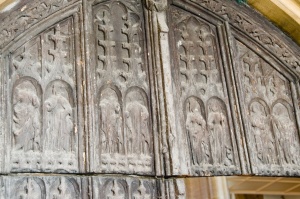 Pause for a moment before entering and notice the beautifully carved panelled 15th-century door. The tracery panels are lovely, but the figures that once decorated the niches between the niches were defaced in the Reformation.

Among the interior highlights is the tomb of Thomas Webbe (d. 1506), a local merchant who helped pay for the Tudor rebuilding. Another notable monument is that of John Roger (d. 1636). Much more modern are stained glass windows by the famous Kempe workshop (c. 1902-1907).

One of the more recent additions to the church is the Commemoration Pew, dedicated to the people of Dedham, Massachusetts. The name of the Massachusetts town is no coincidence; many natives of Dedham emigrated to America in the early 17th century, and the colonial town was named for the Essex village in 1636.

Dedham is the ancestral home of General William Tecumseh Sherman, the famed (or reviled, depending which side of the Mason-Dixon line you live on) American Civil War general. Sherman's ancestors emigrated from Dedham in the 1630s. 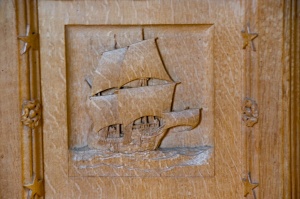 The pew end is carved with the armorial bearings of the USA as depicted on the Great Seal of 1772. The back panel of the pew has a pair of intertwined D's, a carving of the first meeting house in Dedham, the town seal, the Massachusetts state arms, a likeness of an original settler's house, and a carving of The Mayflower, the ship that bore the first Pilgrims to America.

The back of the pew is carved with trailing Virginia creepers among which are shown insects, animals and birds common to North America.

Dedham is the very heart of 'Constable Country', named for the region's most famous native, artist John Constable, who was born in the neighbouring village of East Bergholt and painted St Mary's church on at least 26 occasions. On the wall is The Ascension, painted by Constable in 1821 for St Michael's church in Manningtree. Constable only created three religiously themed paintings in his lifetime, and this is probably the finest of the three. 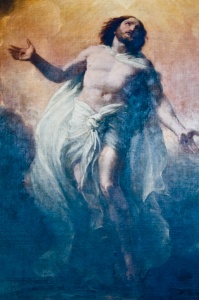 The Ascension,
by John Constable

The Ascension was commissioned by Edward Alston, Constable's cousin by marriage. Alston was a brewer by trade and planned to offer the painting to the Archdeacon of Colchester, the Venerable John Jefferson, so that Jefferson might look favourably on Alston's application to license alehouses.

Alston contracted to pay Constable 200 pounds, a considerable sum in those days, but Jefferson turned down his application. However, the Archdeacon died shortly afterwards, and Alston, who still owed Constable his fee, refused to pay, causing the artist great financial hardship.

Constable did complete the painting, though he rather rushed the lower half. It was installed in Manningtree church in 1822. The church was pulled down in 1965 and the painting eventually purchased by the Constable Trust and installed here at Dedham. It's an unusual place to see a Constable painting!

St Mary's is usually open daylight hours - and it's just as well, for this is a church that is well worth visiting. Though the structure and furnishings are not terribly old by the standards of other churches in the area, the church is full of interest, and of course, there's the Constable connection! 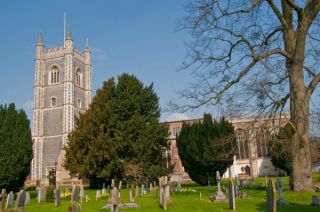 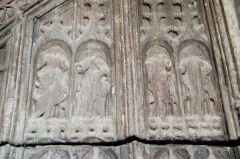 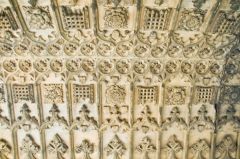 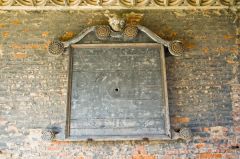 More self catering near Dedham

More bed and breakfasts near Dedham