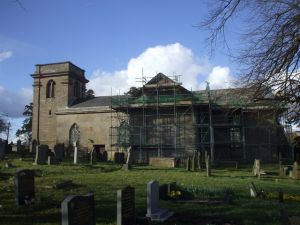 Adderley, St Peter's Church
An early 19th-century church with its origins firmly in the medieval period, St Peter's is built of red sandstone to a cruciform plan. The most interesting feature are the cast iron windows, made in the foundries at nearby Coalbrookdale.

St Peter's dates to 1800, when the existing church on the site was almost completely rebuilt. One feature of the earlier church that survived is the north transept, which contains an extremely nice 17th century carved screen.

Also within the north transept is heraldic stained glass commemorating the Kilmorey family. Even earlier is the font, the only survivor from the 13th-century church on this site. The west tower dates to 1712 and is decorated with classical design elements such as ornamental obelisks.

There are several medieval brasses worth a note; one commemorates an unknown churchman, likely a bishop or abbot. Another brass shows Sir Robert Nedeham (d. 1556), his wife Agnes, and their 9 children.

The tower and nave are used by the parish, but the chancel and transepts are cared for by the Churches Conservation Trust.