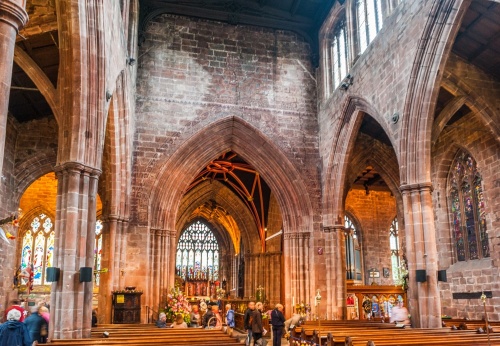 St Mary's Church in Nantwich is known as 'The Cathedral of South Cheshire' and is one of the UK's 44 'Great Churches'; parish churches with all the features of a cathedral. It was awarded four stars in Simon Jenkins' popular book 'England's Thousand Best Churches'. St Mary's stands on Town Square in the heart of historic Nantwich's pedestrianised conservation area.

The church we see today was built around 1340 to replace an earlier chapel of ease. That puts the beginning of construction just a few years before the devastation of the Black Death. It will come as no surprise, then, that the church was not finished for over a century. That explains why the oldest parts of the building are in Decorated Gothic style but the latter sections are in Perpendicular Gothic style.

The medieval church was comprehensively restored from 1855-1861 by Sir George Gilbert Scott. Most of the interior stonework dates to the 14th century. 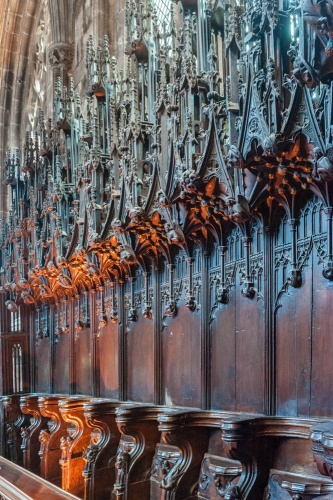 Most people visit St Mary's to see the exceptionally beautiful 14th-century choir stalls with their elegant canopies. The stalls were carved around 1390 and made from oaks harvested in Vale Royal. The stall canopies rise like a forest of spirelets, intricate carving and pinnacles decorated with crockets and small shields. The effect is stunning.

The stall canopies protect seats with some of the finest misericords in England. There are 20 misericords, 10 on the north and 10 on the south side of the chancel.

The range of subjects is striking; you will find overtly religious symbols but also scenes from daily life, such as a man taking a cock to a cockfight, a devil pulling a woman's mouth open as punishment for lying, a widow reading a book, hunters skinning a stag, a begging dog, a griffin atop a man in armour, and men engaged in a wrestling match.

Thee are traditional symbols such as a mermaid with a comb and mirror, a pair of wyverns face to face, a crowned head with a forked beard, and St George battling a dragon. Some of the misericords are obviously meant to be funny, such as a woman beating a man with a ladle, and a dog sticking his head in a stewpot. Others are more religious, such as a figure of Samson riding a lion, and a Pelican in her Piety (plucking her own breast). 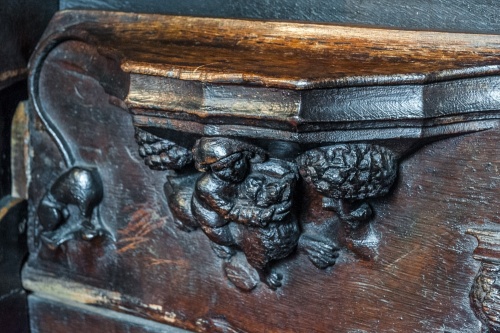 Misericord of Samson riding a lion

One famous carving shows the face of a priest on the rear end of a bird. This carving is thought to be the origin of the expression, 'the parson's nose', meaning the rump of a cooked chicken.

Another 14th-century feature is a rare stone pulpit decorated with panelling in Perpendicular style. There is a second pulpit, this time wooden, made in 1601 by Thomas Finch. The Jacobean pulpit was damaged by a falling beam in 1683 and was cut back as a result.

On the south wall of the chancel is a beautifully carved 14th-century triple sedilia (clergy seat) in Decorated style. Near the entrance door is an intricately decorated octagonal font.

The large north transept window is by the famous Victorian craftsman CE Kempe and incorporates pieces of medieval glass into a traditional Tree of Jesse. Other windows here are by another well-known 19th-century artist, John Hardman. 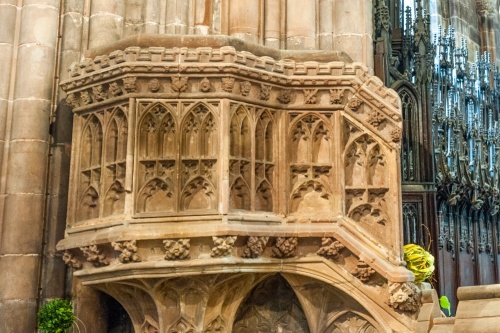 In the south transept is an alabaster and limestone memorial to Sir Thomas Smith (d 1614) and his wife Anne. Smith served as the Mayor and Sheriff of Chester. Anne Smith was the daughter of Sir William Brereton. It was she who erected the monument after Sir John's death, and her effigy was added later.

Also in the south transept is a damaged effigy to Sir David Craddock (1342-1390). The effigy was damaged during the Civil War. It was discovered buried during Sir George Gilbert Scott's restoration in 1855 and re-erected in the treasury cellar. It was later replaced in the south transept. The effigy lies on a modern replacement for the original 14th-century tomb chest.

On the wall is an oval memorial brass to Richard Minshull (1582-1637). Minshull was just 17 when he served as a captain in the Earl of Essex's army sent by Elizabeth I to subdue an Irish rebellion in 1599. He survived the Irish campaign and became a successful cloth merchant. 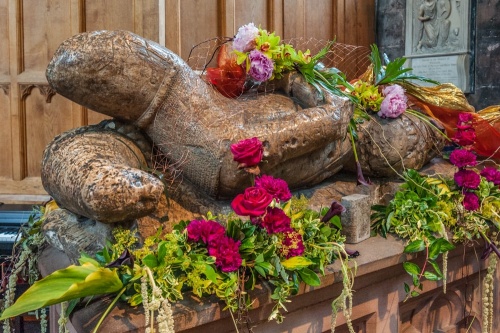 Another historical feature inside St Mary's is a large Bread Chest, or Dole Chest, dated to 1676. The Bread Chest was used to store bread which was given to the poor of the parish after church service on Sundays. The chest has a beautifully carved exterior with the date and the initial 'W', presumably for the churchwarden at the time.

St Mary's is on Church Lane, off Market Street and High Street in the centre of Nantwich. The church is open most days to visitors and was open when we visited on a very wet and rainy day in July. There was a local festival going on and the church was festooned with flowers and colourful decoration. 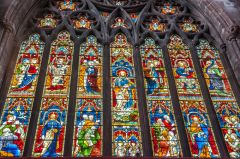 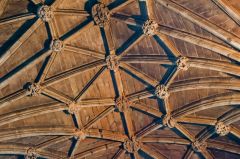 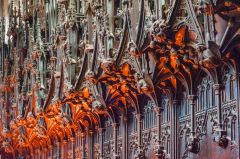 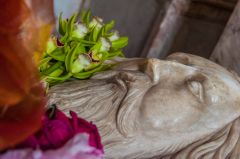 Self Catering near Nantwich