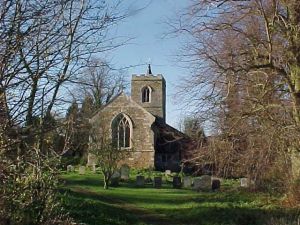 Allexton, St Peter's Church
An attractively sited church dating to the 12th century, with many alterations over the centuries. The most interesting historic feature is the late Norman arcade, dating to around 1160.

The most interesting feature of the church is the arcade arches, which feature traditional Norman carvings, including zigzag and lozenge patterns.

Though the core of the nave is original, the aisles were rebuilt in 1863. The chancel arch, however, is likely to be 13th century. By the door are a pair of stone lions. The font is 14th century, though it has plainly been restored. There is also a piscina of 14th-century date. There are small bits of 15th-century glass and larger sections of 17th-century origin.

Near the vestry is the tomb of Thomas Hotchkin, a former sugar plantation owner who died in 1774 after predicting his own demise.

The church consists of a nave, chancel, low west tower and spire, south porch, and vestry. The tower dates to about 1500. Due to the slope of the land, the tower was built within the west end of the nave, chopping off almost all of a third bay in the nave arcade. You can still see where the westernmost bay of the nave once began.