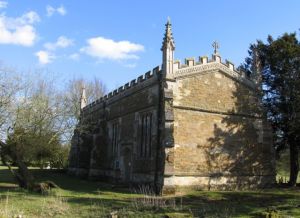 Withcote Chapel
Withcote Chapel is an absolutely delightful early 16th-century chapel of light-toned limestone standing beside a Georgian manor house in a wooded setting. The chapel was begun shortly after 1500 by William Smith.

Smith died in 1506 and the building work ceased for a time until the chapel was completed in the 1530s by Roger Ratcliffe, who married Smith's widow Catherine.

The result is a delicious single-cell building that features a Georgian crenellated top and elegant pinnacles at the corners. The interior was remodelled in the 18th century and now presents a fascinating mix of Tudor and Georgian styles.

Perhaps the best feature is the richly coloured stained glass, rumoured to have been the work of Henry VIII's glazier, Galyon Hone. The glass is not original; it was moved here from another church and is thought to date to around 1536.

There is a neo-classic reredos behind the altar, and a pair of beautifully detailed funerary monuments to Geoffrey and Matthew Johnson, who built the Hall.

Withcote Chapel is not used for regular services and is cared for by the Churches Conservation Trust. It can be a bit difficult to find, but it will be worth the effort to do so!

More self catering near Withcote Chapel >>