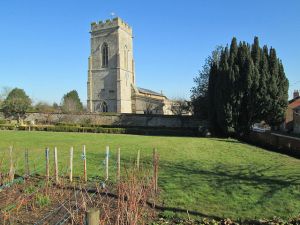 Belton-in-Rutland Church
The parish church of St Peters dates to the 12th century. There is a 13th-century font with interesting dog-tooth decorative carving and arcading. There is much Victorian work in the interior, including a striking reredos and organ case.

The oldest part of the church is the south arcade, built around 1190, and there is more 12th-century stonework in the lowest part of the nave walls. Local tradition says that there was once a north aisle but this was destroyed by fire in the 14th century and was never rebuilt.

Fire seems to have been a regular hazard in Belton; in 1776 a servant girl threw hot coals out of a window at Ivydene cottage, and the coals started a fire which destroyed 27 buildings and reached the church before it was extinguished. You can still see the discoloured stone pillars, turned red from the heat of the flames.

In the south aisle is a peculiar piscina, its bowl carved with a grotesque face with asses ears. The south porch is 16th century, while the west tower was added in the late 14th century, and has a rather intriguing frieze below the battlements, decorated with grotesque gargoyles.

The most interesting feature, though, is not within the church at all; a number of medieval stone effigies are built into a section of stone wall between the church and the nearby road. Quite how they got there no one knows!

More self catering near Belton-in-Rutland Church >>