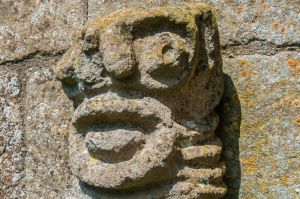 All Saints church in Braunston dates to the early 12th century. The south doorway arch survives from this Norman period. Also Norman are the plain font and the chancel arch. In the south-west corner, embedded in the wall, is a section of an ancient carved coffin. In the south aisle are two sections of medieval wall painting, which were hidden for many years under coats of plaster.

All four of the stained glass windows in the chancel were made by Kemp. If you are visiting with a child, set them to find Kemp's trademark wheatsheaf symbol, which is hidden in every window.

Though the interior is interesting, the most intriguing feature of All Saints is outside. Go around the side of the west tower and there you will find a roughly carved statue, about three feet high, depicting a grinning figure. The reverse of the figure is flat, and it was used for many years to form a step, so the carving was only discovered when the step was taken up.

Note: Do not mistake this church with All Saints, Braunston, Northamptonshire, the 'Cathedral of the Canals'.

More self catering near Braunston-in-Rutland All Saints Church >>

More bed and breakfasts near Braunston-in-Rutland All Saints Church >>