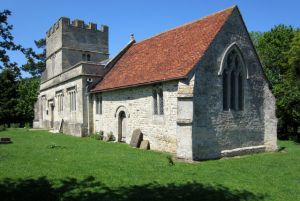 Furtho, St Bartholomew's Church
Nothing much remains of Furtho village beyond a farmhouse and a few cottages - and the restored parish church dedicated to St Bartholomew. The church is 12th century, but much of what we can see today is the result of an extensive rebuilding around 1620, probably financed by Edward Furtho.

The building is of coursed limestone, with a mix of slate and tile roofs. It consists of only a nave, chancel, and west tower. The oldest part of the church is the south doorway, which may be late Norman and appears to have been reset, perhaps suggesting an earlier church on the site.

There is a mix of 13th and 14th-century windows in the nave. The internal features include a 13th-century piscina, tomb-recess and image-brackets. In the 14th-century chancel is a marble memorial to Anthony Furtho (d. 1558) and his two wives, as well as a monument to Edmund Arnold dated 1676.

Though the building looks peaceful now, it was not always so. During World War II the church was used as a storage place for documents by the Northampton Record Society. On one eventful occasion, a bomb falling nearby destroyed all the windows.

Near the church is a medieval dovecot, and the remains of the former village of Furtho can be discerned only as lumps and bumps in the surrounding landscape.

St Bartholomew's has not been used for regular services since 1935 and has now come into the hands of the Churches Conservation Trust.

The Granary at Fawsley - 16.1 miles
Daventry, Northamptonshire
Stay from: £50.00