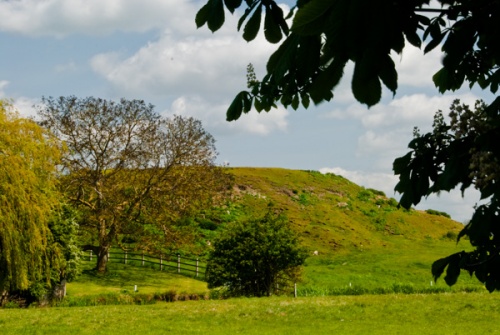 Fotheringhay Castle from the River Nene

Only the earthworks and the conical motte remain of Fotheringhay Castle, standing on level ground above the peaceful River Nene. The castle was founded around 1100AD by Simon de St Liz (Senlis), Earl of Northampton and Huntingdon. St Liz chose the site carefully to control an important river crossing.

The castle was a typical Norman motte and bailey, with a conical mound protected by a bank and ditches, and topped by a timber keep. The site would have been approached through a wide enclosure (the bailey) where secondary buildings such as stables and workshops stood.

When St Liz died his widow Margaret married King David of Scotland and Fotheringhay passed to the Scottish crown. It was besieged and captured in 1221 by Wiliam de Fortibus, Earl of Abermarle, who took the garrison by surprise after crossing the frozen moat in winter.

It was forfeited to the English crown in 1294, which is a politically correct way of saying that Edward I seized it. Around 1340 the timber keep was replaced with a massive stone keep dubbed 'The Fetterlock'.

A survey at this time describes the castle as containing the keep, two chapels, a great hall, kitchens, and a number of secondary buildings. The site was defended by a moat and drawbridge, leading to a gatehouse. 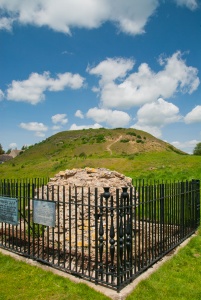 Masonry wall of the castle

By 1377 the castle was in a poor state, but it was granted to Edmund Langley, son of Edward III, who repaired the keep and transformed it from a military stronghold into a comfortable palace and centre of administration.

Edmund Langley's son Edward founded a college of priests at the castle to say prayers for the House of York. Around 1415 the college was moved east and attached to an old Norman church. The church was rebuilt in Perpendicular style, and the nave set aside for use by the villagers. The college was dissolved in the Reformation, and the nave of the collegiate church forms the current parish church.

Richard III was born here on 2 October 1452, and though tradition says he was baptised at Fotheringhay church, he might equally well have been baptised at the castle chapel. Richard only lived here for six years until he was moved for safety to Ludlow Castle.

After Richard lost his life at the Battle of Bosworth in 1485 the castle was allowed to decay. Henry VIII granted Fotheringhay to Catherine of Aragon, and Catherine lavished money returning the castle to its former glory.

Unfortunately, her tenure as queen did not last, and Henry granted the castle in turn to each of his subsequent wives. It was used primarily as a prison, and it is in this role that it saw its most famous moment in history. 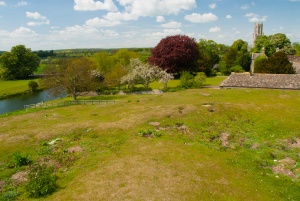 View from the castle motte

In 1586 Mary, Queen of Scots was brought to Fotheringhay from Chartley in Staffordshire to stand trial for treason. Why Fotheringhay? Because the castle was set in a marshy landscape, where access was difficult, especially during the winter months.

It was felt by the authorities that the unfortunate Scottish queen would be more secure at Fotheringhay, and the location would discourage any rash attempt to free her by force.

Mary was tried at the castle on 14 and 15 October 1587 in a show trial and predictably found guilty on 25 October - a foregone conclusion.

She was not executed immediately, for Elizabeth I was reluctant to sign the death warrant, but finally on 8 February 1588 Mary was executed in the great hall. She carefully dressed for the occasion in black with a scarlet bodice and petticoat; the colours carefully chosen because they represented martyrdom.

Accounts of the execution vary, and may be inaccurate, but tradition says that the executioner was nervous and made a poor job of his work, taking two or three blows to sever the queen's head.

One version says that when the head rolled from the body the executioner went to pick it up by the hair only to have the 'hair' prove to be a wig and come off in his hand. Another version says that Mary's little dog hid in her skirts and refused to leave her corpse.

Mary's body was left on view at Fotheringhay until July when it was carried at night to Peterborough Cathedral for burial. When Mary's son James too the throne as James I of England he had his mother's body transferred to Westminster Abbey and buried in Henry II's chapel, in a tomb slightly larger than Elizabeth I's.

After Mary's execution the castle was allowed to decay completely. It was eventually sold, and local people began to rob the site of building stone. The castle was finally dismantled completely in 1628, and stone used to build an inn in Oundle.

The great hall was purchased by Sir Richard Cotton, who had the interior stripped and the furnishings transferred to Connington, in Huntingdonshire.

Tradition, probably inaccurately, suggests that James VI of Scotland, Mary's son, ordered the castle destroyed after he took the throne of England as James I. The more plausible explanation is that it was simply falling apart anyway. Bits of the castle were incorporated into nearby Castle Farm, and sections of the moat were filled in during the 19th century. 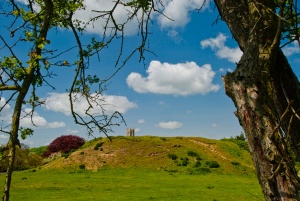 East view of the motte

The castle today consists of a low mound, flattened on top, surrounded by a ditch, with an outer bailey earthwork. Close to the river is a small section of masonry wall protected by an iron railing.

Three plaques for one bit of masonry seems a bit over the top, but in truth there's little enough of the castle remaining otherwise.

For a place that witnessed historical drama, the birth of kings and the death of queens, Fotheringhay offers pretty sparse remains to enjoy. So it is the association of the castle with royalty that will bring visitors here, not any great standing walls or dank and dismal dungeons.

The mound is easy to climb and even easier to enjoy as a good example of a motte and bailey site, but aside from that there's not much to see!

A stone carving of a lion thought to have been made during renovations by Catherine of Aragon can be seen inside the church porch, and the tombs of Richard, 1st Duke of York, and his son Edward, Earl of Rutland, stand on either side of the altar.

On the main road through the village is Garden Farm, once called New Inn, built by Edward IV to house overflow guests of Fotheringhay Castle. Over the entry are heraldic shields bearing traditional Yorkist symbols.

The castle site is open access, and a footpath runs directly past the northern edge of the mound. You can also get good views from the bridge across the River Nene.

More self catering near Fotheringhay

More bed and breakfasts near Fotheringhay