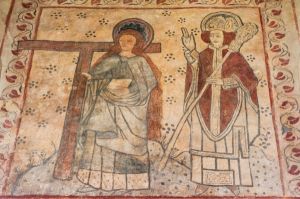 Broughton is a small village overwhelmed by the urban sprawl of Milton Keynes. Within the 14th-century nave of St Lawrence church, however, is a medieval delight; a series of wall paintings that were buried beneath layers of wall-covering for centuries until they were revealed during a Victorian restoration.

The wall paintings cover most of the north and south walls and depict a variety of themes, including St George slaying his dragon, a Doom (Last Judgement), a Pieta (Mary with the dead body of Jesus), and various figures of saints. Though some have been quite obviously restored, the restoration is generally restrained and does not overly detract from the brilliance of the original paintings.

The scene of St George and the Dragon takes up much of the south wall. The painting is exquisitely detailed and dates from about 1470. At some subsequent point, the roof was lowered, with the unfortunate effect that St George's head and shoulders are lopped off. 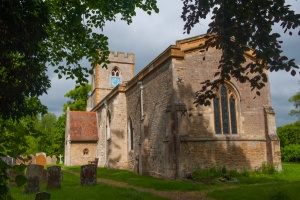 One complete painting shows The Warning of Swearers, a fascinating composition with a central Pieta figure. Around the Pieta are clustered nine figures of fashionably dressed men, each holding what appears to be a body part (foot, hand, etc.).

This would appear to be a warning to those medieval people who swore oaths by parts of Christ's body. Two of the young men are playing at backgammon, so, presumably, the painting is meant to warn against the evils of gaming as well as swearing.

Beyond the quite wonderful series of wall paintings, there are several very fine tombs and richly coloured Victorian stained glass. As for the exterior, it is fairly plain, with the exception of the lovely 15th-century tower. 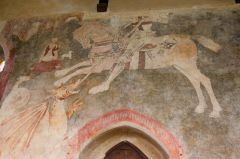 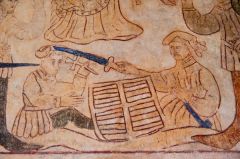