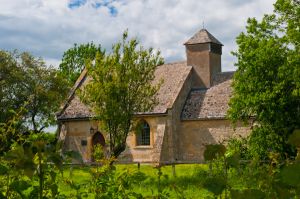 A delightful little church dating to the 12th century. St Mary's consists of just a nave, very small chancel, and central bell turret. The nave and chancel are of warm Cotswold stone, supported by simple angled buttresses and topped by a slate roof. The building stands in an orchard, one of the prettiest settings you can imagine.

Though the exterior is of obviously early date, the interior is almost completely Georgian and is essentially untouched for the last two hundred years. The nave is crammed with high box pews, with four larger pews for important local families at the east end. Another Georgian feature is the large double-decker pulpit. There are also Georgian communion rails and altar table. The only light is provided by candles.

The first written record of Washbourne comes from AD 780 when King Offa of Mercia granted land here to the monks of Worcester. The manor did not stay in church hands but passed through several owners before the first Washbourne lord in 1259. The village was sometimes called Knight's Washbourne, in deference to the Washbourne lords. The Washbourne family remained lords of the manor until they sold the estate in the early 19th century.

The first recorded mention of a church at Little Washbourne comes from 1240, but the building dates almost entirely from the 12th century, with much 18th-century interior remodelling. It was for many years a chapel attached to Overbury church. The parish was originally part of Worcestershire, but though it was transferred to Gloucestershire in 1844 it remains part of the Worcestershire diocese.

The church is quite small; only 18 feet wide and 41 feet long. The walls are rubble, but in the 18th century the north wall of the nave and most of the south wall was faced with ashlar. The most obvious external feature is a series of large buttresses added in the 19th century to stabilise the structure. Atop the east gable is a small stone cross, probably added in the 14th century.

If the exterior is largely medieval, the interior is a lovely example of Georgian rebuilding. There are rows of high-sided 18th-century box pews leading to a double-decker pulpit with inset marquetry panels. Suspended above the pulpit is an attractive sounding board, or tester, with similar marquetry inlay. At the west end, the box pews give way to open-sided benches, looking down on a fairly simple font dated to 1840.

The floor is made of simple flagstones, but the chancel roof is original medieval timber-framing in a collar-beam truss design. There is only one monument in the church; set on the north wall of the chancel. This is a late 18th century memorial to Sir William Hill of London (d. 1786).

There are faded medieval wall paintings throughout the church; these are most obvious in the nave, where several designs appear to be overlaid. The earliest painting dates to the 13th century, with 17th-century text the newest layer. Another obvious painting is on the splay of the north window in the chancel, where there is a repeating pattern of rosettes.

I must have driven past Little Washbourne church a hundred times without realising it was there. It is set back from the B4077 just north-west of the Hobnail Inn, half-hidden by trees so that you wouldn't know there was a medieval church there if you weren't looking for it. There is no obvious parking, so you'll have to pull onto the grass verge. There is a key available at the inn, but the church is left open in summer.

St Mary's is no longer in regular use and is cared for by the Churches Conservation Trust.

There's nothing spectacular about St Mary's, but its the sort of church I love to visit; with features representing several historical periods, from medieval to Georgian. The location is blissfully peaceful, despite it being so close to the nearby Stow-Tewkesbury road. 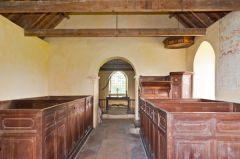 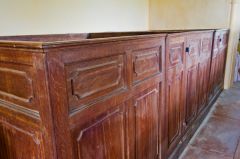 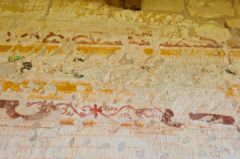 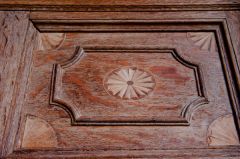 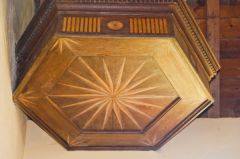