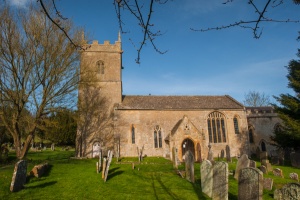 There has been a church in Ashton since at least the late Saxon period, but the church was first mentioned in the Domesday Book of 1086. There was no mention of a dedication to St Barbara at that time, in fact, the church appears as St Andrews in records from the 12th and 16th centuries.

The first record of the unusual dedication to St Barbara does not come until the 18th century. St Barbara was said to have lived sometime before the 7th century. She was the daughter of a pagan man who killed her for her Christian beliefs. As he struck the fatal blow a bolt of lightning came down from the heavens and killed him also.

The lightning bolt insignia of St Barbara is now used by the Royal Artillery, and St Barbara is the patron saint of gunners, miners, and blacksmiths. According to an information sheet in the church, there is only one other British church dedicated to St Barbara. 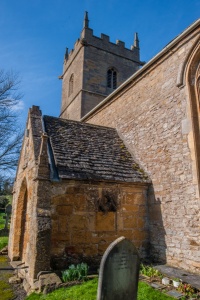 The south porch and
west tower

There are reminders of the Norman church, including the south doorway with its traditional rounded arch and a plain, recessed tympanum. Other fragments of Norman stonework are set into the south wall of the chancel. The lowest section of the tower is 13th century, and there is a 13th century lancet window in the south nave wall. There is a priest's door with unusual leaf moulding above the arch, and over the arch is a datestone carved with 'Anno Domini 1624'.

The nave arcade of four arches dates from the 15th or 16th century. The chancel arch appears in the same style but it is a rebuilding from the early 19th century. The chancel itself was rebuilt in 1624 by the lord of the manor, Sir John Franklin. The Franklin arms, a pair of dolphins and lion heads, are carved around the east window. 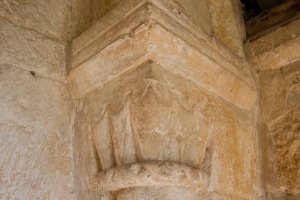 There is a finely carved 15th-century font in Perpendicular Gothic style, and a 17th-century altar table. Most of the memorials are to members of the Baldwyn family. In the chancel is a memorial dated 1652 and a 19th century tablet to William Baldwyn (d. 1857). There are more Baldwyn memorials in the nave and aisle, and an early 19th-century memorial to the Martin family. Set in the nave floor are numerous 18th-century grave slabs.

The most interesting memorial by far is a rather odd carved panel on the south chancel wall, dated 1651. The inscription does not tell us who the tablet is supposed to commemorate, but it is thought to be a member of the Sambach family. The inscription is in the style of the Metaphysical poets and rather floridly proclaims:

There is very nice stained glass, much of it late 19th-century glass in Arts and Crafts style by the F Holt Company of Warwick. A small fragment of medieval glass is set in one of the windows in the south wall, to the west of the south door. This roundel depicts the arms of the Cheyne family, who held the Priory of Beckford from 1379-1437. Sir John Cheyne served as Speaker of the House of Commons.

The glass is set in a very large 15th-century window. The size of the window suggests that it was brought here from a nearby abbey at the Dissolution of the Monasteries.

In the churchyard, to the south of the church, is a yew tree thought to be at least 350 years old, and just outside the lych gate is a 15th century cross. The cross shaft is entirely original, but the cross head has been lost and replaced by a sundial. It is thought that the cross stands on the site where visiting monks from Beckford Priory preached sermons to the local residents before the church was built. 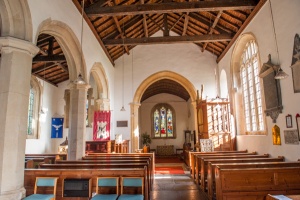 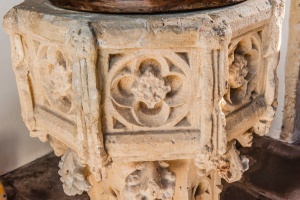 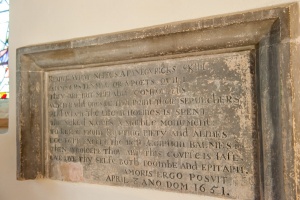 1651 memorial in the chancel 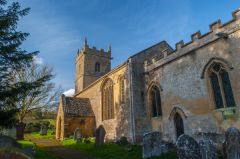 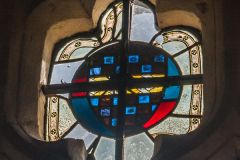 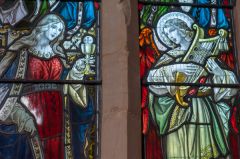 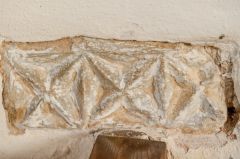 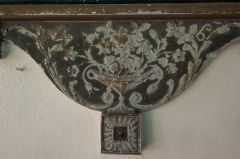 Nearest Accommodation to Ashton under Hill:

More self catering near Ashton under Hill

More Hotels near Ashton under Hill

More bed and breakfasts near Ashton under Hill