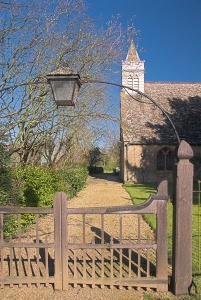 Historically there have been two Wormingtons, Great and Little. The villages are both served by the small parish church dedicated to St Katherine. The church is composed of a nave, chancel, and south aisle.

Unusually, there is no tower, rather a small wooden bellcote over the west door. The bulk of the church is built in Perpendicular style, with the exception of the west door, which has been remodelled in Georgian classical style that seems rather at odds with the rest of the architecture.

There are two good reasons to visit St Katherines. The first is a stone Saxon crucifix displayed above the altar at the east end of the south aisle. The crucifix depicts Jesus on the cross, and above him, the Holy Spirit is represented as a hand reaching out.

The crucifix has been dated to the 9th century and was found in the grounds of Wormington Grange. It is thought that the crucifix belonged to Winchcombe Abbey before the Dissolution of the Monasteries. 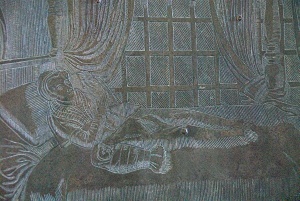 The other appealing historic artefact at St Katherine's is the Savage Brass. This is a memorial brass dated to 1605 which is hung on the south wall of the chancel. The brass depicts a woman in bed, and the inscription reads, "Anne eldest daughter of Richard Daston and wife of John Savage of Nobury, Worces 1605 in childbed with infant." The brass is frequently used to make rubbings and is well worth studying for the excellent depiction of the clothing and room furnishings common to the early 17th century.

On either side of the Savage brass are two small heraldic brasses, showing a device similar to that found on the tomb of Anthony Daston (d. 1572) in the church at Broadway.

Other features of note are the 14th-century crypt arch which has been filled in. This is most easily visible from the exterior of the south aisle. Also, the benches in the nave contain some very nice Jacobean carving.

Wormington is located just off the B4078 about 4 miles north of Winchcombe. St Katherine's church is just off the road through the village, and there is parking along the verge. 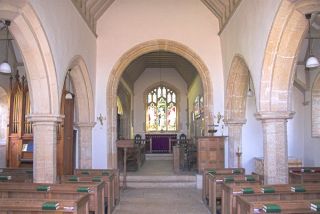 More self catering near Wormington

More bed and breakfasts near Wormington