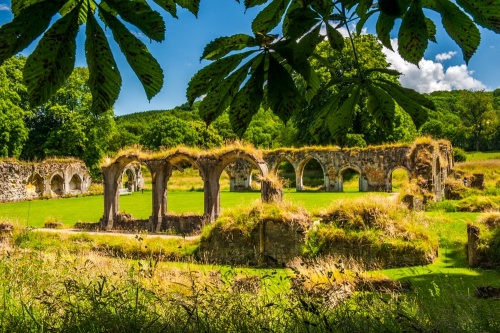 Just a mile from Winchcombe are the ruins of Hailes Abbey. Hailes was founded by Richard, Earl of Cornwall, brother of Henry III, in 1246. It seems that Richard was beset by a terrible storm during a voyage at sea. In desperation, he swore a vow to found a religious house if he survived. He did survive the incident and kept his vow. He was granted the manor of Hailes by Henry, and there established an abbey with the help of Cistercian monks from the abbey of Beaulieu in Hampshire.

Remarkably, the work of building the abbey was completed in only 5 years, and in 1251, Henry III, Queen Eleanor of Provence, and 13 bishops attended the consecration ceremony.

About 1270 the abbey acquired a phial said to contain the blood of Christ. Possession of such a potent religious relic was just what the abbey needed to ensure its financial health. A special extension to the east end of the abbey church was built, and there the phial was kept in a special shrine.

With the phial in its possession, Hailes became one of the most popular destinations in England for religious pilgrims. After the Dissolution of the Monasteries destroyed the Abbey in 1539, the "blood" was proclaimed to be a mixture of saffron and honey. 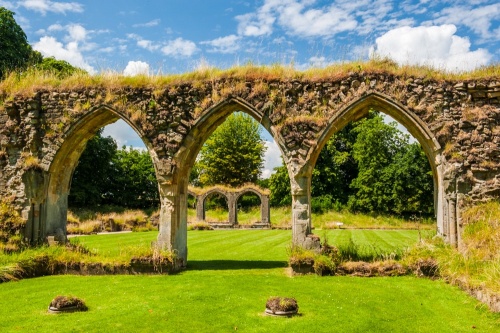 So popular was the abbey to medieval pilgrims that the Prior of Hailes built a hotel to house the richer visitors. This hotel lives on as The George Hotel, at Winchcombe. The building itself has been altered several times, but still retains an open gallery over the courtyard.

In the small museum attached to the abbey are examples of medieval floor tiles, vaulting bosses and other carved decoration. Hailes Abbey today is a peaceful sight, with sheep grazing near the ruined arches that stand silently in a quiet meadow.

Here there is no sound and light show, none of the "tourist attraction hubbub" that so often detracts from historic sites. Here, the pervading sense is one of solitude and peace.

Notes
Hailes Abbey is a lovely, and under-appreciated medieval site. I've had the pleasure of visiting several times, and each time I've almost had the site to myself. The museum is small, but fascinating, with numerous labelled samples of salvaged sculpture.

Please take a few minutes to visit the small parish church just outside the gates of Hailes Abbey; it is completely unpretentious, and the unrestored medieval wall-paintings are striking. 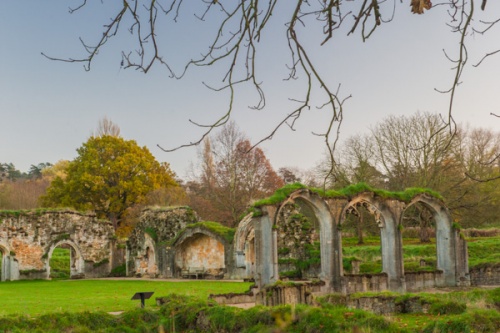 Hailes Abbey on a winter's evening

More self catering near Hailes Abbey