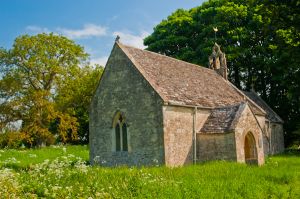 A delicious Norman church in a secluded countryside setting, All Saints dates to about 1170 with some 14th-century rebuilding. The church consists of a nave, chancel, north porch, and central double bellcote. Though it is essentially a Norman church, it was sensitively rebuilt in the Victorian period by William Butterfield.

The church was built around 1170, with the addition of late 14th-century south porch and north chapel. Shorncote was restored by the famed Victorian architect William Butterfield in 1883 at the not-inconsiderable cost of £1000.

The oldest part of the current building is the doorways; the south and blocked doorways are both Norman work. The north doorway is actually more elaborate than the functional south door. The north door columns have carved capitals and the tympanum has been recut and put to novel use as a threshold stone.

The south doorway is carved with a pair of scratch dials and inevitable graffiti - but before you decry the iniquities of modern society, take a closer look and you realise that the graffiti dates to the early years of the 18th century.

There is more 'historic' graffiti inside the church - all the north and south chancel windows have graffiti etched on their sills. A third window on the north side was blocked in the 14th century to create a small niche, perhaps for an Easter Sepulchre.

The north-western window has a 13th-century coffin for a sill. There is a small piscina inserted in the sill of the south-eastern window.

The wagon-vaulted chancel roof is decorated with wooden bosses and dates to the 14th century. There is a late 17th-century communion table. The east window displays medieval stained glass with the Berkeley family coat of arms. The walls of the chancel - particularly the north wall and the space above the chancel arch, are covered in late 12th or early 13th-century wall paintings. The design is a simple series of rectangles with a flower pattern in each rectangle. 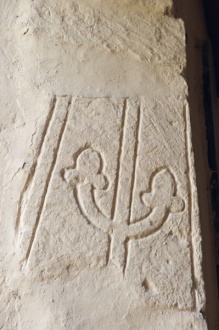 The earliest part of the interior is the chancel arch, which dates to 1170 and has very nice carved capitals on the arch columns. A pair of wooden doors from the nave date to the 15th century and appear to have been made from a medieval screen.

Standing to the south of the chancel arch is a wooden pulpit of 1727. Above the pulpit is a hexagonal sounding board, or tester, made to help amplify the priest's voice.

At the west end of the nave is a simple Norman tub font and on one wall of the west window surround is a piece of a medieval cross shaft. One final note of interest is a finely carved Georgian royal coat of arms over the chancel arch.

We cannot be certain when it was made, but it is surprising to find royal arms of carved and painted stone in a small country church like Shorncote.

All Saints is no longer in regular use and is cared for by the Churches Conservation Trust. This is a delightful church to visit - a very simple country church in a secluded, peaceful location, tucked in beside farm buildings. Shorncote is only a few miles from the quite wonderful medieval church at Cricklade. 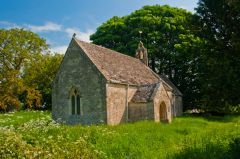 More self catering near Shorncote, All Saints Church >>

More bed and breakfasts near Shorncote, All Saints Church >>