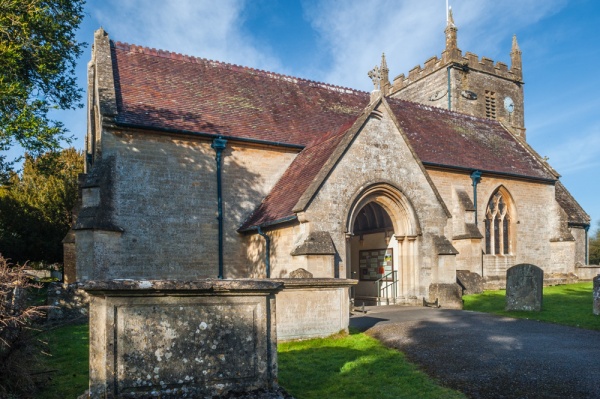 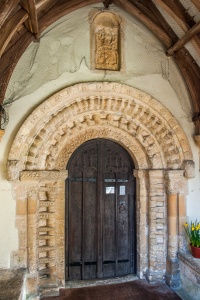 South Cerney is a pretty village at the edge of the Cotswold Water Park. The parish church of All Hallows dates to the 12th century, though it probably stands on the site of an earlier Saxon building. A fragment of a Saxon cross shaft was found in the churchyard, but no trace of the building survives.

The oldest part of the present church is the Norman tower, built around AD 1150 beside the manor house. A spire was added to the tower in the 13th century, but this was struck by lightning in 1857 and taken down.

The beautifully carved south doorway is also 12th century. It features four moulded arches, each carved with a different pattern. The inner arch has intricate interlace patterns, while the second arch is carved with grotesque figures of beasts. Over the arch is a niche holding a worn carving of Christ in Glory and the Harrowing of Hell.

The chancel dates to the 14th century, and you can see a worn wall painting on the east wall. The large east window has beautiful Decorated Gothic tracery and the glass was installed in memory of WLR Sutton. Set into the south wall is a double piscina, and on the wall near the priest's door is a corbel in the shape of a male head. Another head is incorporated into the double sedilia, under a beautifully carved ogee canopy. 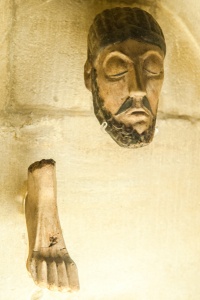 Most of the remainder of the church is Victorian, restored by JP St Aubyn from 1862, when the pews and south aisle were added. On the west wall is a memorial to Walter Portlock, who died in 1701 at the age of 100.

By far the most interesting memorials, however, are outside in the churchyard, where you can see a late medieval; tomb chest topped by effigies of a man and woman. another grave slab is carved with a late medieval floriated cross, possibly suggesting it is the grave of a clergyman.

The most interesting historic feature in the church is a carved head and foot of Christ, part of a 12th-century crucifix; the oldest wooden crucifix in Britain. The original pieces are on loan to the British Museum in London, and what we can see here are polyester resin copies. The crucifix pieces were discovered in 1913, hidden in the north-east wall of the nave. we can only guess that they were hidden at the height of the Reformation, to avoid them being destroyed.

The church was open when we visited, and as far as we can tell is normally open to visitors daylight hours. Near the church, at the end of Silver Street, stands St Edward's College, founded by Anne Edwards in 1834. 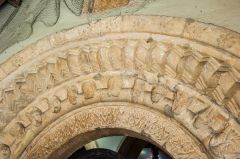 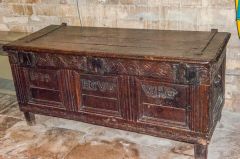 More self catering near South Cerney, All Hallows Church

More bed and breakfasts near South Cerney, All Hallows Church

Self Catering near South Cerney