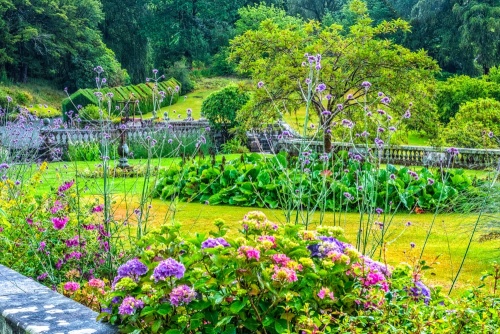 Graythwaite Hall Gardens were planted about 1890 by Thomas Mawson, (see Brockhole) The resultant Arts and Crafts style design, scattered with sundials by architect Dan Gibson, is a delight in spring when the rhododendrons, azaleas and flowering shrubs are in glorious bloom.

There is a Dutch Garden, yew hedges and topiary, and a formal rose garden as well.

The 17th-century country house of Graythwaite Hall is not open to the public, but the woods surrounding the Graythwaite estate were a favourite walking spot for William Wordsworth, and provide the backdrop for the Beatrix Potter story, 'The Fairy Caravan'. 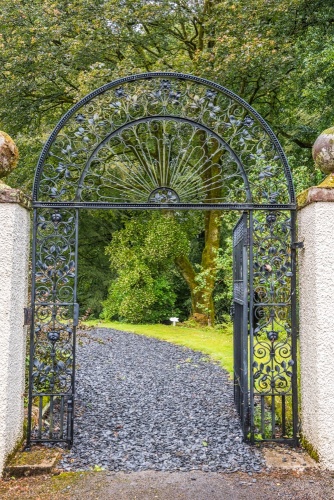 Wrought-iron gates at the garden entrance

The history of Graythwaite Hall is the history of the Sandys family. The family come from Burgh-on-Sands in northern Cumbria, and take their name from the village on Solway Firth. Around the year 1400, John Sandys settled in the Furness Fells on the west side of Lake Windermere as a tenant of Furness Abbey.

Sandys was probably involved in the iron industry. Iron ore was mined in Furness and brought up Lake Windermere by barge to be smelted. The area that is now the Graythwaite Estate was blessed with abundant wood for coppicing and that wood could be used to make the charcoal used in the smelting process.

The Sandys family were living at Esthwaite Hall by the early 16th century, and William Esthwaite was named as Receiver of the Liberties of Furness. William's son was Edward Sandys, who entered the Church and rose to become the Archbishop of York.

Archbishop Sandys founded the Hawkshead Grammar School to provide free education for local youths. His younger brother Thomas settled at Graythwaite Hall, and the Hall has been a Sandys family home for over 500 years.

The Hall we see today was built around 1660 as a small rectangular building. A south wing was added later in that century, with a second extension in the 18th century. In 1840 the south facade was refaced in Victorian Gothic style and in 1890 it was refaced again using sandstone from St Bees. As a result, the house looks Victorian, but this is misleading; the core of Graythwaite Hall is Elizabethan. 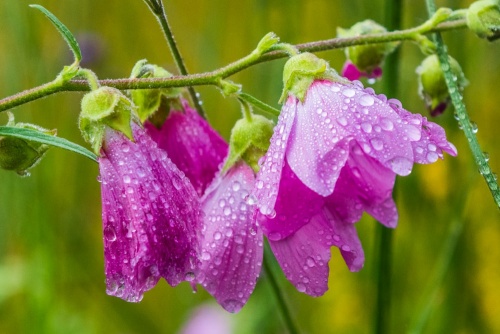 Summer colour after a brief shower

In 1896 Colonel Thomas Sandys brought in the garden designer and landscape architect Thomas Mawson to redesign the old gardens at Graythwaite Hall. It was one of Mawson's first major commissions and helped establish him as one of the late Victorian period's leading designers.

Mawson's remit was to use the natural contours of the site and incorporate existing stands of trees to create a low-maintenance garden that would thrive on acid soil. The result is primarily a spring garden based on flowering shrubs, Ericaceae (heather) and rhododendrons. Mawson created a mix of formal and informal areas set against a woodland backdrop.

The plants are accented with a variety of sculptures such as sundials, and an ornate wrought-iron gateway.

One formal area is the Dutch Garden, originally planted with tulips which were replanted several times throughout the summer months. That was in the days when country houses like Greythwaite Hall had a large staff and a large number of gardeners to maintain the property! 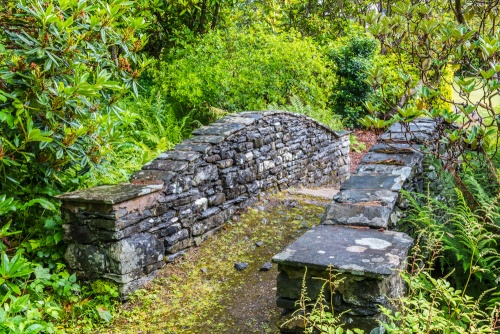 A trail leads over a picturesque footbridge and up a slope to the family's dog cemetery, where the gravestones are arranged in a semi-circle.

Another area is the Daffodil Field, where decorative trees have been planted over the years to commemorates Sandys family births and marriages.

One very moving garden feature is a tree planted in soil brought back from Thiepval Ridge on the Some battlefield. The tree was planted to honour Mervyn Keats Sandys, Captain 2nd Battalion York and Lancaster Regiment, who died on 22/23 October 1914 at Touquet Bois Grenier near Armentiers. Tragically, his body was never found. Captain Sandys was the twin brother of Lt Colonel GO Sandys of Graythwaite Hall. 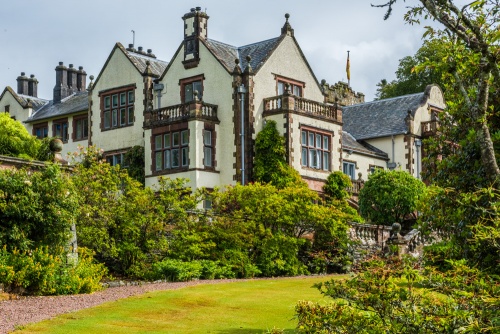 Graythwaite Hall is signposted on the minor road between Newby Bridge and Hawkshead. Just turn into the Hall grounds and follow the obvious sign for visitor parking. There is an honesty box at the parking lot entrance where you will also find a leaflet giving the history of the Hall, the Sandys family, and the gardens. When we visited the requested admission fee was 4 pounds.

From the car park follow the small white arrows labelled 'Garden'. The route leads past the back of the Hall, down some steps, and into the garden. We were greeted by an extremely friendly dog, followed by another that wasn't so welcoming but once it had barked a few times vigorously it accepted us and wandered off, leaving us to enjoy the garden on our own.

The white arrows lead you past the house frontage and through the grounds on a roughly circular route, with a short detour up a hill to a poignant dog cemetery.

Even though we visited on an overcast day - punctuated by a brief rain shower - we loved Graythwaite Hall Gardens. The setting is delightful, and we will happily return in future. 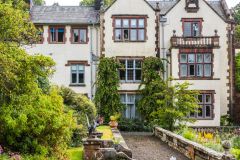 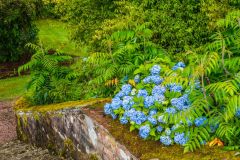 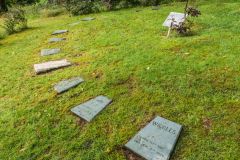 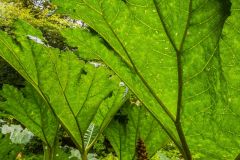 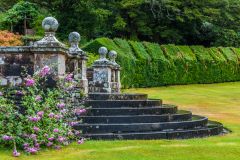 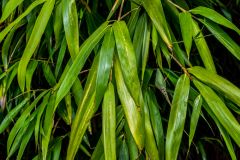 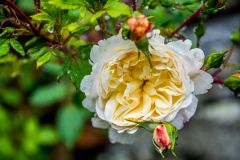 More self catering near Graythwaite Hall

Self Catering near Newby Bridge