Sir Malcolm Campbell and his son Donald set 21 world speed records on land and sea. This musem uses video, photos, and scale models to tell the story of this remarkable father and son team.

One of the highlights is a full-scale model of the jet engine hydroplane Bluebird in which Donald Campbell was killed while attempting to break the water speed record on Coniston Water in 1967. Another replica is the Bluebird car that the elder Campbell used to break the world land speed record in 1935.

There is much more to the museum than the Campbell Legend Bluebird Exhibition, however. Now in historic premises at Backbarrow, the museum presents a total of over 30,000 motoring exhibits of all things automobile.

It's almost overwhelming; so many exhibits are crammed in side by side. One unexpected exhibition tells the story of the Women's Land army (WLA) from its roots in WWI to its role in keeping farms productive during the dark days of WWII. 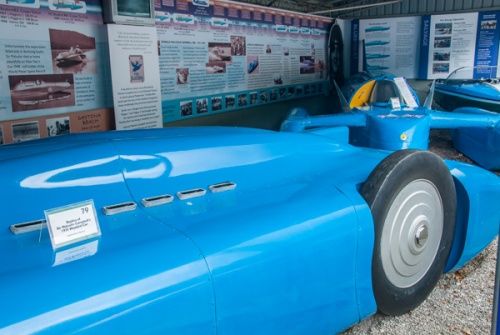 And there's still more, with artefacts representing the industrial history of the Leven Valley, including several historic shop fronts.

One of the museum highlights is a realistic recreation of a 1920s garage, from petrol-pumping equipment to automotive repair facilities. This may be the largest collection of motoring paraphernalia in Britain, from petrol pumps to scale models, posters, containers, badges, even brand mascots and pedal cars.

Aside from the Campbell collection there are a wealth of historic vehicles on display, from a 1936 Bentley (owned by Donald Campbell), a Jaguar XK140 and a Willys Jeep. There are over 150 historic vehicles to see, plus tractors, motorcycles, engines, and a huge collection of motoring memorabilia.

See Vincent motorcycles and a fascinating look at what the future of motoring might hold, including an extensive look at the history of electric vehicles. See an exhibition of classic pedal cars, including the Austin J40 and the Pathfinder Special.

Then there is an exhibition of motoring in the Lake District, including the fascinating story of how accommodation providers catered to early motorists. And did you know that automobile makers used the steep Lake District passes to test their new models?

The museum was established in 1978, baed on the collection of motoring enthusiast Donald Sidebottom. For many years the collection was housed next to the stately home of Holker Hall. In 2010 the museum moved from Holker Hall to new premises at Backbarrow, on the shore of Coniston Water, occupying the old premises of the Reckitt's Blue Dye Works. 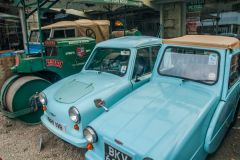 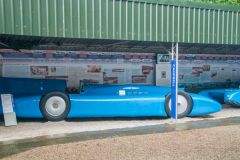