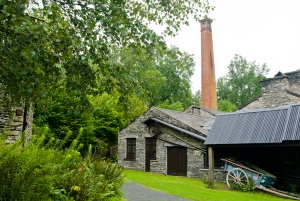 Tucked away in a wooded glade just to the west of Lake Windermere is an important piece of Britain's industrial heritage. In this quiet spot stands one of the last Lake District bobbin mills, a reminder of the once vital industry that helped keep the cotton mills of Lancashire running.

The cotton spinning industry was a backbone of Britain's 19th-century industrial revolution, and the cotton mills of the north needed bobbins on which to wind the cotton thread they spun into cloth. A typical mill of the early 19th century might have thousands of spindles, and each spindle required several bobbins. A bobbin is essentially a cylinder with a flange at each end to keep the yarn from slipping off.

Many of the bobbins which supplied the mills of Lancashire were produced in what is now Cumbria. The Lakeland valleys were ideally situated to take advantage of good growing conditions for coppiced wood, which was the raw material from which bobbins were made. The swiftly running streams that fall down from the high fells provided a plentiful source of power to run the bobbin mills.

The first mill of record at Stott Park was created in 1835 as a speculative enterprise by John Harrison, a yeoman farmer of Lakeside. Harrison never intended to run the mill himself, rather, he built it with an eye to leasing the factory to tenants. The mill was first advertised for sale in December 1835. 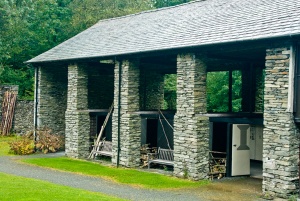 The first lessee at Stott Park was a man named Rushford, but by 1841 the lease had passed to James Bethom. The family most associated with Stott Park, however, was the Coward family, who had an interest in several of the bobbin mills in the area. The Cowards gained a bit of a reputation for their treatment of workers.

Many of the boys and young men who worked in the mill (there are no records of female workers) were drawn from the workhouses of Liverpool and Manchester. The Cowards provided housing for the men in Finsthwaite, but they required the men to buy their supplies at the company's own shop, at prices set by themselves.

Working conditions in a Victorian bobbin mill were poor, though no worse than any other industrial site of that period. Respiratory problems were a constant concern, because of the amount of sawdust produced from the milling process.

The bobbin industry suffered in 1860 when the American Civil War put a damper on the almost insatiable market for cotton and woollen cloth. The industry never really recovered in the latter years of the 19th century, and mills such as Stott Park had to diversify to survive. Thus it was that Stott Park produced a wide variety of wooden implements, from rungs for rope ladders used by the British Navy, to tool handles and toggles for duffle coats. 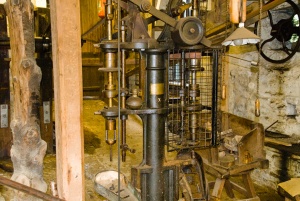 Diversifying in this fashion helped the mill to survive long after many of its contemporaries had closed down, but all things come to and, and in 1971 the end came for Stott Park Bobbin Mill. The mill was closed, but in 1983 was reopened as a museum under the care of the Department of the Environment, and passed to the care of English Heritage the following year.

The first part of the bobbin making process was actually woodland management. Trees were carefully cut by coppicing when they had reached a certain diameter, then transported to the mill, where they were carefully dried to avoid splitting. Visitors can wander through the woodlands surrounding the mill and see stands of coppiced wood.

Once cut, a coppice took from between 8-16 years to regenerate to the point where the wood was ready to be cut once again. In the early years of bobbin production, the lathes used to turn the blanks of wood were fairly primitive, so the flanges on each end of the wooden cylinder had to be glued on by hand. This was a job for the young boys.

Boys were apprenticed for as long as five years, doing odd jobs like carrying wood and gluing flanges on the finished cylinders. Only after a lengthy period of apprenticeship were the boys allowed to run the lathes that shaped the bobbins.

This apprenticeship period was vital, for the process of working the bobbins was a dangerous one. There were none of the health and safety regulations which are so common today, and the machines had no safety guards to protect the operators. 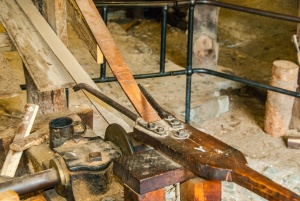 Workers were paid by how many pieces they produced in a day. A working day might last 12 hours, which sounds like a lot, but it was probably much better work than that enjoyed by workers in the cotton mills further south in Lancashire.

At one end of the mill yard is a coppice barn, one of two that once stood on the site. Here the raw timber was stacked for drying. The large overhanging roof kept the wood relatively dry, while the open sides of the building allowed for air movement to speed the drying process. Wood was dried for a year in the coppice barn before it was ready to be used in bobbin production.

The dried wood is then cut into rough cylinder shapes called cakes. A cake will produce several bobbin blocks; shaped to the approximate size of the desired bobbin. While the bobbin block is still wet it is bored lengthwise - a dangerous operation requiring a great deal of concentration by the machine operator! The bobbins are then shaped to the approximate finished size on a roughing lathe.

The 'roughs' are dried by spreading them on a latticed floor to allow air circulation. Once the roughs are dry, they are finished to the exact desired shape on a finishing lathe. Finally, the finished bobbins are placed in a rotating drum with an amount of paraffin wax for polish. Larger bobbins are polished by hand and might be painted with colour-coded ends depending on the colour of the yarn they were expected to hold.

The mill at Stott Park originally used a water wheel to power its lathes. A water turbine was introduced in 1858, and in 1880 a steam engine was added, not to replace the water turbine, but to supplement it during the drier summer months when the flow of water in the streams was low.

Most steam turbines of that period ran on coal, but the one at Stott Park was made to run on the wood by-products of the milling process. The original steam turbine was replaced in the 1890s, and again in 1931. Finally, the steam turbines were replaced by a more efficient pair of electric motors in 1941. The steam turbine can still be seen in operation, however.

A visit to Stott Park Bobbin Mill is like stepping back in time, and provides an evocative glimpse into an important part of Britain's past. Visits to the mill are by guided tour only (pre-booking is not necessary). 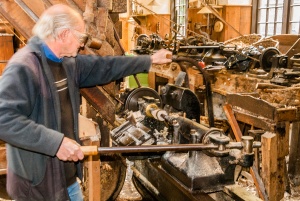 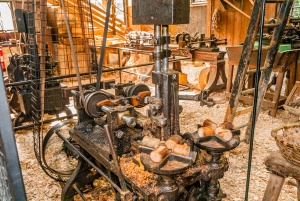 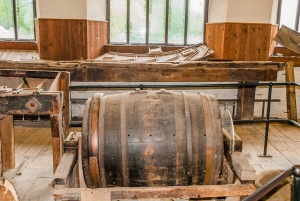 The finished bobbins are
polished in a barrel 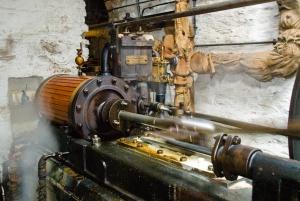 Self Catering near Newby Bridge