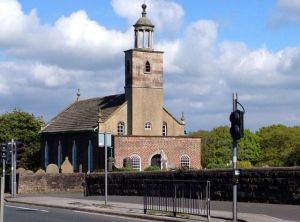 Tarleton Old Church
The old church of St Mary ('old' to distinguish it from the Victorian church Holy Trinity nearby) is an early Georgian brick building which may stand on the site of a Tudor chapel. St Mary's has been called 'picturesque', though 'peculiar' might be equally appropriate.

The Georgian core of the building was lengthened and the small tower heightened in 1824. The tower was topped with a classical domed rotunda. The effect is odd, though not unattractive, but it certainly does not create a stylish whole, especially when viewed from the west end.

The interior is simple, with Georgian box pews for those who could afford them to the east and open pews at the west end for the poorer parishioners. A gallery stands at the west end and wraps around the south wall, and the east end terminates in an octagonal, rounded apse. Four large, round-headed windows let into each side.

Tarleton Old Church is no longer in regular use and is cared for by the Churches Conservation Trust.