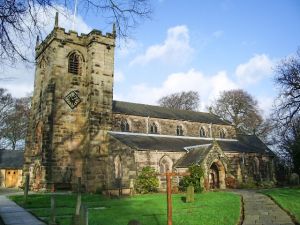 Penwortham, St Mary's Church
Now almost overwhelmed by urban Preston, the church of St Mary's stands on a wooded site near the remains of a Saxon fortification, overlooking an ancient crossing of the River Ribble. After the Norman Conquest, William the Conqueror gave Penwortham to Roger de Poicteau, and it was perhaps this Roger who was responsible for building the Norman motte which can easily be seen beside the church.

Roger de Poicteau also founded a Benedictine Abbey at Penwortham, with monks coming from Evesham. After the Dissolution of the Monasteries, the monastic estate was sold to the Fleetwood family, who built a stately home known as Penwortham Priory. This was torn down in the early 20th century to make way for housing estates.

As for the church itself, it is primarily a 14th-century building, with the addition of a 15th-century tower in Perpendicular style. It is built of red sandstone and gritstone and features an ancient timber roof.

Of the numerous memorials, perhaps the most interesting is to John Horrocks, who was a prominent industrialist in the golden age of the Lancashire cotton industry and founded the textile company Horrockses, Miller, & Co.

The church stands in woodland, giving it the peaceful air of a rural building, despite the surrounding urban areas. The churchyard is accessed by way of a lych gate erected in 1896.