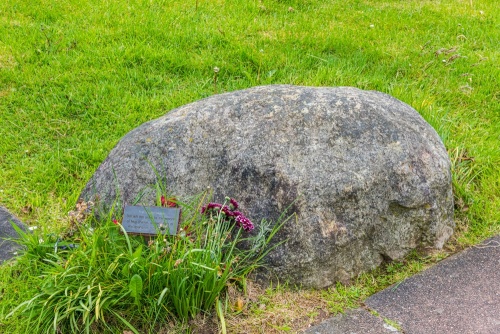 Does a boulder in a Lancashire churchyard mark the final resting place of an 18th-century witch? That''s the legend that surrounds the grave of Meg Shelton, known locally as The Fylde Hag or The Fylde Witch.

Who was Meg Shelton?

We know very little for certain, and even the name by which she is remembered is probably wrong. She was likely a local woman whose real name was Margery Hilton, and may have lived (at different times) in Singleton, Wesham, Catforth, and Cottam. Hilton died in 1705 and was buried in the churchyard of St Anne's Church in Woodplumpton, about five miles north-west of Preston.

She is said to have had the ability to transform herself into animals and other objects, a power that she used to cause mischief and to steal from her neighbours. Among other ill-deeds, she is said to have made cows ill and turned their milk sour. 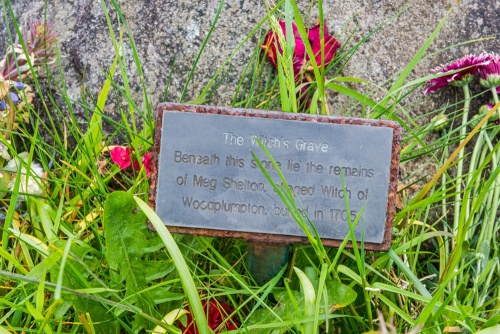 Many of the stories about Shelton were probably written long after her death, and embellished over time, so that it is hard to know what people thought of her during her lifetime. By all accounts Shelton was a cripple who walked with a marked limp. She is said to have been injured while in the shape of a rabbit, when a large black dog chased and bit her on the heel.

Most traditions have her body being found crushed against her cottage wall by a barrel. According to some versions of the story, the unusual death was seen by villagers as a sign that the Devil had come to claim her.

So far, Meg Shelton's life could be simply a case of a poor, lame woman being singled out by ignorant neighbours, but it is what happened next that really catches your imagination.

Meg Shelton was buried in St Anne's churchyard, but her body refused to stay underground. The following morning, her corpse was found lying beside her grave. She was reburied, and once more her corpse reappeared. 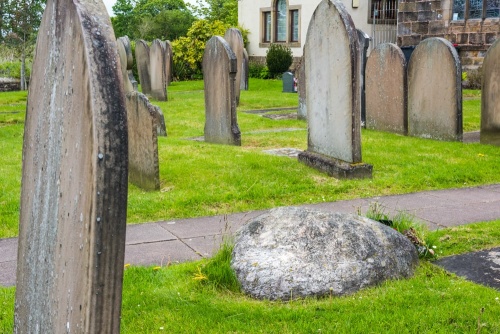 The grave lies beside the churchyard path

Finally, the priest performed an exorcism and Shelton was buried for the third time, but this time she was interred in a narrow vertical hole, like an oversized post hole, and she was inserted upside down, so that if she tried to dig her way to the surface she'd be going the wrong way. Finally, a boulder was placed over the top of her unusually-shaped grave.

There is one obvious problem with this story. If Meg Shelton was truly thought to be a witch, she'd never have been buried in the churchyard, on consecrated ground.

A local resident informed us that when he was a boy he was told that the grave was originally outside the churchyard, on unconsecrated ground. The burial ground boundaries were later expanded, bringing the 'witch's grave' inside the churchyard.

Whatever the truth of the matter, stories began to circulate about the grave. It was said that if you balanced on the boulder and turned around three times without falling off, you would be granted a wish. Woe betide you if you fell off the boulder, though; Meg Shelton would come after you that night. 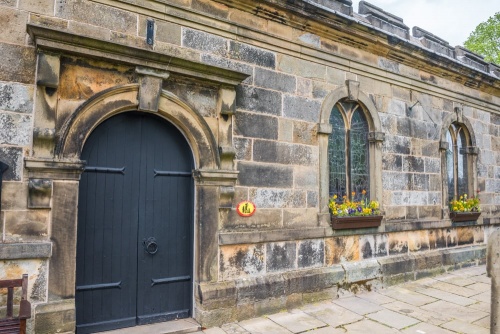 There has been a church on this site since at least the 11th century, though the building we see today is a result of rebuilding in 1639 and restoration in 1900. The oldest part of the building is a fraggment of a Norman grave slab in the vestry and there are early Christian carvings around the north door. Outside the 1912 lych gate is a set of village stocks.

St Anne's Church is located on Woodplumpton Road (the B5411) near the southern edge of Woodplumpton village. It is approximately five minutes off the M55 (Junction 1) and M6 (Junction 32). It is easily reached from central Preston via the B5411.

NB. Unfortunately, we found the church locked when we stopped to visit Meg Shelton's Grave.