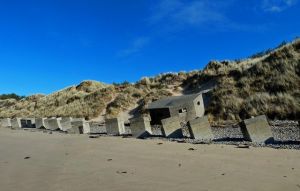 WWII defences on Burghead Bay
The long, wide sweep of Burghead Bay stretches from Burghead in the north-east to Findhorn in the south-west. For much of the bay, the shore is composed of a broad, sandy beach and low dunes - indeed, the sand stretches well past Findhorn halfway to Nairn. There are WWII pillboxes and tank traps scattered along the dunes, abandoned now, and slowly being absorbed by the sand.

The Forestry Commission plantation of Roseisle Forest occupies the shore of the eastern half of the bay. There are numerous paths through the forest for walkers. The western shore is largely given over to RAF Kinloss air force base, but the shore is still accessible.

The best access for enjoying the bay is either from Burghead or off the B9089 north of Hempriggs. There is a picnic area, parking, and viewpoint at Findhorn.

More self catering near Burghead Bay >>