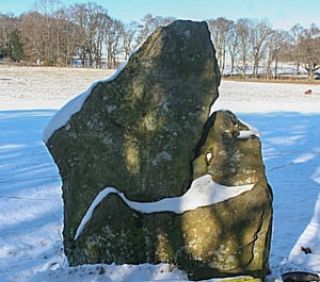 Camus's Stone
A solitary standing stone, about 1.75 metres high, composed of a mix of quartz with mica and schist. On the north face of the stone are well-preserved cup and ring carvings.

The name of the stone is traditionally said to commemorate a victory of Malcolm II over a Danish force under a leader named Camus, who was killed in the battle.

An alternative version of the story suggests that the name Camus comes from the Gaelic word for a bend, or crook, a reference to the shape of the stone.

The stone is made of quartzose micaceous schist and stands 5'9" high. There are field stones heaped loosely at the stone's base.

There are two cup and ring marks, each with a cup surrounded by up to five concentric ring marks. Between them are more cup marks.

Camus's Stone can be found just off the B9012 up a track to Inverugie. Stop at the steading and the stone is in a copse of trees just beyond. According to OS maps, there is a burial cairn a very short way north of Inverugie, a few minutes walk from the stone.

While you are in the area it is worthwhile to stop at the old 14th-century ruined kirk in Duffus.

More self catering near Camus's Stone >>