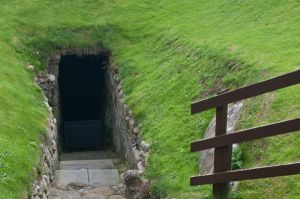 The Aberdeenshire town of Burghead packs a lot of historic interest into a small area. Among the numerous historic remains is a peculiar underground chamber, cut out of the solid rock. Steps lead down below the surface of King Steet to a large, vaulted chamber. At the centre of the chamber is a rectangular cistern, or well, with a raised ledge, or seat, at one side.

The origin of this well has been the subject of a great deal of debate; one theory is that it was made by the Romans, another that it was created by the Danes. Another theory suggests that it was an early Christian baptistry, where local cult figure St Ethan was worshipped.

The well chamber was excavated in 1809, as part of an attempt to create a municipal water supply. The precise nature of the site has been a subject of conjecture and speculation since then. The entire chamber was cut out of solid rock, as was the cistern, which is fed by an underground spring. Both the cistern and the well chamber are rectangular in plan, but with rounded corners. 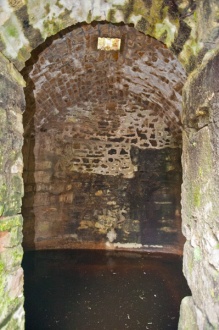 The chamber walls taper towards the top, almost forming a flattened arch. The upper part of the walls is said to form a frieze, though I found this hard to make out in the gloom.

The entrance arch and barrel-vaulted ceiling were added as part of the 1809 work, and the original stone steps were recut, and new steps added at that time, so what we see is something of a mix of original and 19th-century work.

The well stands within the ancient promontory fort of Burghead. We don't know who built the fort, but it was certainly used by the Picts. The well is unique in Scotland, which makes interpreting the site rather difficult. It is certainly not Roman, probably not a bath, but possibly a baptistry.

Though it may indeed have served as a well, it seems unlikely that the builders went to all this trouble just to create a well, which makes some form of ceremonial use far more likely. Whether that use was secular or religious we simply don't know.

And that's the enjoyable part of Burghead Well; its a mystery!

You need to get the key before you can view the well. When I visited, the directions to the keyholder's house weren't all that clear, but it proved to be only 60 seconds walk away. The key was inside the keyholder's front porch, and all I had to do was open the porch door, get the key, and sign my name on a check-out sheet. I didn't have to hope the keyholder was at home, which was rather handy! There was even a handy information placard about the well, which gave lots of background historical detail. 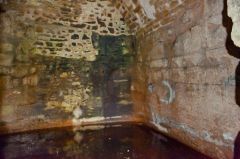 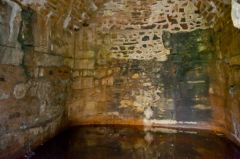 More self catering near Burghead Well >>